The trend isn't letting up as borrowers once again prove they are getting better at paying their mortgage on time, according to the Office of the Comptroller of the Currency’s 2016 third-quarter report on mortgages.

The second-quarter report provided similar findings with the overall performance of mortgages improving from the previous year.

The Office of the Comptroller of the Currency collects data on first-lien residential mortgage loans serviced by seven national banks with large mortgage-servicing portfolios. The seven national banks include: Bank of America, Citibank, HSBC, JPMorgan Chase, PNC, U.S. Bank and Wells Fargo. However, data through the fourth quarter of 2015 includes CIT/OneWest.

The report cited that 94.8% of mortgages were current and performing at the end of the quarter, compared with 93.9% a year earlier.

The chart below shows the percentage of pending foreclosures, performing loans as well as two categories of delinquency. 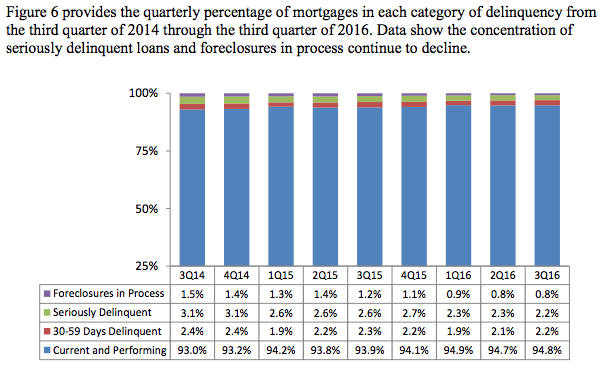 In addition, servicers initiated 47,955 new foreclosures in the third quarter of 2016, which is down 1.6% from the previous quarter and 25.3% from a year earlier. 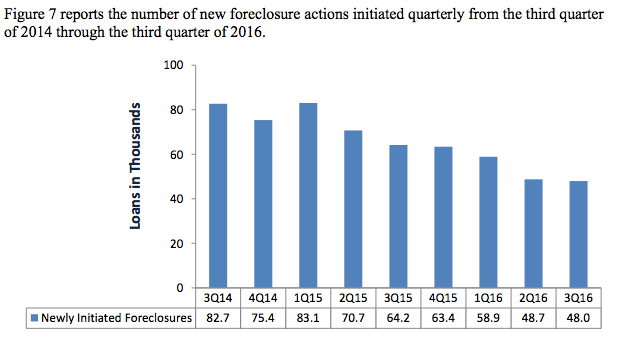 Home forfeiture actions during the quarter — completed foreclosure sales, short sales, and deed-in-lieu-of-foreclosure actions — tumbled 23.3% from a year earlier, to 32,463. 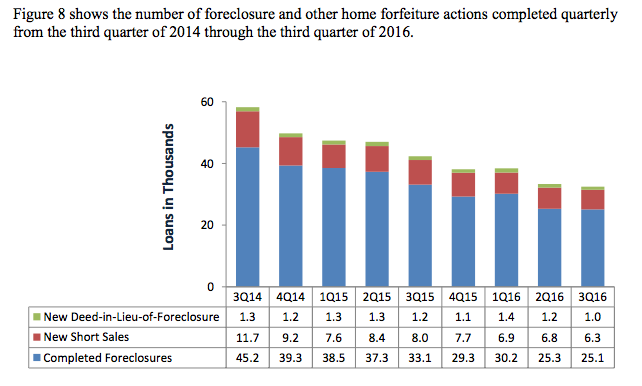 A study from 2015 by a senior fellow and a researcher at the Mossavar-Rahmani Center for Business and Government at Harvard’s Kennedy School posted that the nonbank market share of agency purchase mortgage originations is growing at an astronomical pace, moving from 27% in mid-2012 to 48% in late 2014.

The first-lien mortgage data in this report from the seven banks makes up 36% of all residential mortgages outstanding in the United States or about 20.4 million loans totaling $3.5 trillion in principal balances.