The Federal Housing Administration announced Tuesday that its flagship fund, the Mutual Mortgage Insurance Fund, grew in fiscal 2016, marking the MMI Fund’s fourth straight year of growth, but that doesn’t mean that an additional cut to the FHA’s mortgage insurance premiums is coming.

Last year, the MMI Fund reached its Congressionally mandated threshold of 2% ahead of schedule, as the FHA’s fiscal year 2014 actuarial report estimated the fund would reach the Congressional mandated 2% level during fiscal 2016.

Analysis of the FHA’s 2015 report showed that last year’s growth was driven primarily by the FHA’s Home Equity Conversion Mortgage program. Last year, without the HECM program, the MMI Fund would have come in at 1.65%, below the 2% threshold set by Congress.

But this year, the fund grew again (as seen in the chart below), and the growth didn’t come from the HECM program. 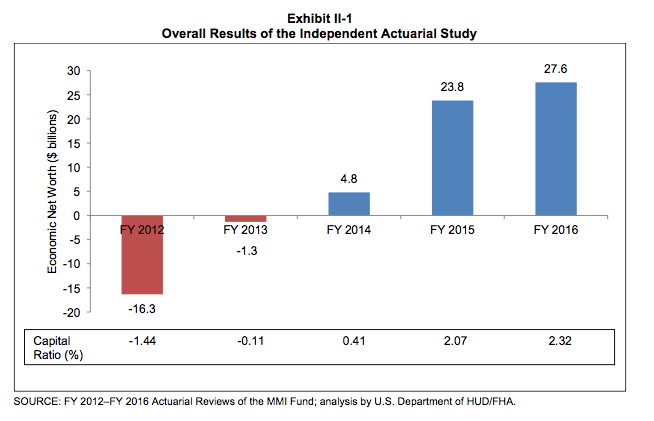 According to the FHA’s actuarial report for 2016, the economic net worth of the FHA’s forward mortgage portfolio increased by $18.3 billion, reaching an overall MMI Fund net worth of $27.6 billion.

On the other hand, the value of the HECM portfolio fell this year, decreasing by $14.5 billion.

The FHA’s report said that the decline in the HECM portfolio is the result of changes in HECM modeling assumptions. The HECM model was updated to include better estimates of the expenses and sales prices of defaulted HECM loans, the FHA said.

As noted last year, the performance of the FHA’s HECM portfolio has fluctuated greatly in recent years.

Last year, the HECM portfolio drove the growth of the MMI Fund, increasing to $6.8 billion.

But that reversed itself again this year, as the HECM portfolio now has a net worth of -$7.7 billion.

The forward mortgage portfolio, on the other hand, has steadily grown in recent years, before exploding this year.

The net worth of the forward portfolio grew again in 2015 to $17 billion.

But this year, the net worth of the forward portfolio more than doubled, climbing it $35.3 billion.

The progression of both the forward and HECM portfolios can be seen in chart below. 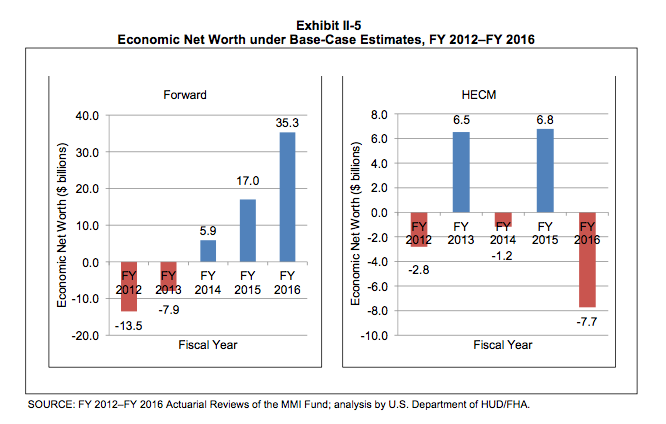 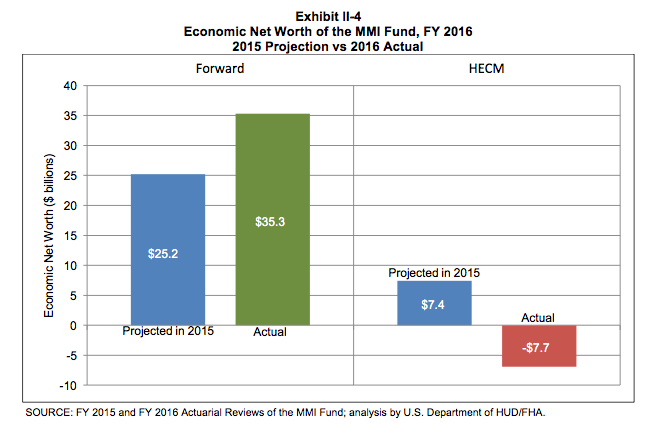 “FHA’s strong, sustained progress has helped fuel the housing market recovery over the past eight years,” said HUD Secretary Julián Castro. “Today’s report once again confirms that our steps to maintain a financially sound fund are paying off, giving more American families the opportunity to afford a home of their own.”

Under the “effective risk management” category, Castro noted that the performance of the FHA’s portfolio continued to improve.

The FHA’s report showed that the serious delinquency rate fell by 50% over the last four years, showing an approximately a $60 billion improvement in the dollar amount of seriously delinquent mortgages.

In addition, the FHA’s report showed that the seriously delinquent rate is now at the lowest level in at least 10 years — falling from a peak of 9.83% in January 2012 to 4.9% at the end of fiscal 2016, as shown in the chart below. 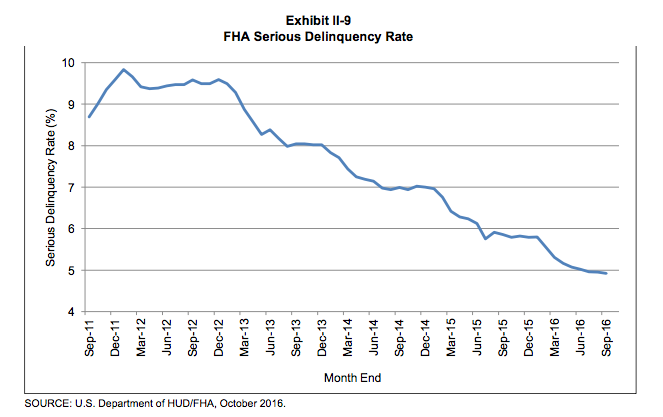 “FHA has come a long way since our housing crisis,” said Ed Golding, HUD’s Principal Deputy Assistant Secretary for Housing. “With evidence that FHA’s fundamentals are strong and improving, there is no doubt that FHA is making steady progress accumulating capital and, at the same time, improving access to credit for working families.”

While the MMI Fund is growing, Golding told reporters Tuesday that there is no additional cut coming to FHA mortgage insurance premiums.

That cut and the subsequent performance of the FHA’s fund drove speculation that the FHA may cut premiums this year or remove the life-of-the-loan policy, but Golding said that there will be no cut to the FHA’s premiums.

Golding did say that the results of the FHA’s portfolio “clearly show that there is room to return pricing to a level that reflects the risk in the program,” but said that there are other factors that are considered when determining to cut premiums, namely the outlook for the economy, the budget implications of a cut, and determining when is the right timing for a cut.

As for whether the coming Trump Administration will consider a cut, Castro and Golding said it’s unknown at this point, as Castro said that he has not spoken to anyone on Trump’s team yet about the transition from the Obama administration to the Trump administration at HUD.

“I have not had the opportunity to meet with anyone yet, but I anticipate that happening in short order,” Castro said. “I’ve asked everyone at HUD to help ensure transition goes smoothly.”