California is perhaps one of the most important states in mortgage finance. So much of the mortgage finance world is based in California and, like Texas, the industry is a huge source of employment for workers of varying levels of education.

Beacon Economics famously pointed to factors in the Golden State that will lead to a continued, strong housing economy.

Home sales are estimated to continue on their upward trajectory over the next two years; however, the pace of growth will cool to the 4% to 6% range, a rate more in line with income growth. Home sales in California are forecast to rise by double-digit percentages in 2015.

Plus a report yesterday from the California Association of Realtors also had some good news.

The main finding from that report is that the August 2014 price for the average home in California was the highest observed since 2007.

But, trouble could be brewing:

“California’s housing market continues to be bifurcated both geographically and demographically, with the San Francisco Bay Area and high-end housing markets outperforming other regions and market segments,” said California Association of Realtors chief economist Leslie Appleton-Young. “A strong job market and barriers to building new housing are creating an imbalance between supply and demand in some housing markets. Buyers who are not impacted by affordability issues are fueling sales in the high-end market, which is putting upward pressure on home prices.”

And according to Property Radar, year-on-year the numbers are much less positive.

August 2014 sales are actually down 13.5% from August 2013. “Median prices fall in half of California’s largest 26 counties,” the report reveals.

According to Property Radar, there are three things that could pop the California real estate market.

1. There’s no more money in the market

Yes, this is literal.There is not more money coming into the California real estate market, there is actually much, much less.

“Hey honey, let’s use our extra cash to buy a home, refurbish it and quickly sell at a profit,” say fewer and fewer people in California.

According to Property Radar, flip sales fell 2.3% for the month and are down 36.5% for the year. Flip sales are defined as properties that have been resold within six months.

3. Not just the mom-and-pops

Institutional Investor purchases edged up 0.9% for the month but are down 23% from August 2013. As the supply of distressed properties dwindle and prices rise, institutional investor demand has retreated due to the lower return on investment.

In general, institutional purchases have posted consistent monthly declines since peaking in December 2012 and are down 43.9% since then. Trustee sale purchases by LLCs and LPs are down nearly 83.6% from their October 2012 peak.

Here’s a chart from Property Radar showing the drop in home sales. Mix the below results with the above three facts and it seems clear California real estate is headed for a bust. Click chart to enlarge. 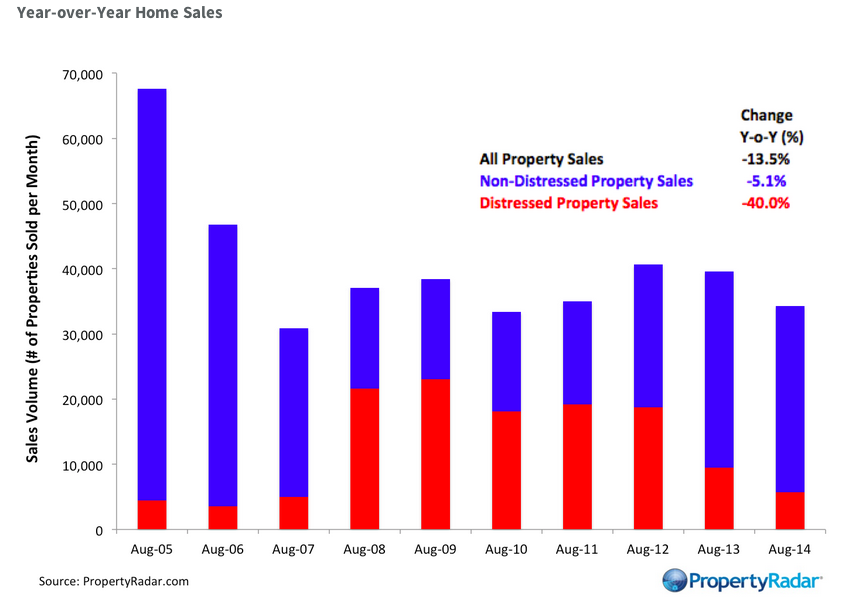