Freddie Mac is looking to offload even more credit risk with the debut of a new risk-sharing deal structure, supported by loans with loan-to-value ratios of 80-95%.

In the past, Freddie’s Structured Agency Credit Risk transactions have all carried LTV ratios of between 61%-80%, with an average LTV of roughly 75%.

The loans carry a gross mortgage rate of 4.565% over a 30-year term and the average FICO score of the borrowers is 752.

In the STACR deals, the note holders are not entitled to receive any cash from the mortgage loans in the reference pool, which is different from a normal residential mortgage-backed securitization offering.

With the STACR deals, the performance of the underlying loans dictates the timing and amount of principal and interest that Freddie is obligated to pay on the notes, according to Moody’s Investors Service.

STACR 2014-HQ1 will be the smallest of any of the previous four STACR deals. Prior to this deal, the smallest credit-risk sharing deal offered by Freddie was the first one, in July 2013. That STACR deal carried a loan balance of $23.065 billion.

Fitch Ratings and Moody’s have each released presale reports for the STACR 2014-HQ-1. Fitch issued A and BBB ratings to the deal. Moody’s rated approximately $316 million of the STACR 2014-HQ1 offering.

In its breakdown, Fitch listed the high LTV ratios as a potential concern. Fitch’s report notes that its analysis of the 80-95% LTV loans resulted in a “probability of default” that was approximately 1.3 times greater than the lower LTV loans in Freddie’s previous STACR offerings.

Click the image below for a breakdown of the LTV ratios of the underlying borrowers.

Despite the high LTV ratios, the underlying borrowers do have high FICO scores, which Fitch regards as a positive. “The collateral pool consists of borrowers with strong credit profiles, demonstrated by the high original WA FICO score of 752,” Fitch’s report states. “Approximately 26.9% of the borrowers have credit scores of 780 or higher. Borrowers with high credit scores generally experience a lower probability of defaulting on their debt.”

In fact, nearly 48% of the borrowers have FICO scores above 760.

Click the image below for a breakdown of the FICO scores. 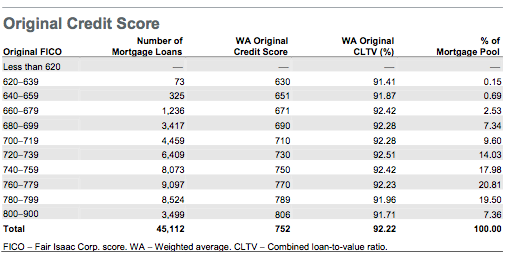 “Approximately 10.7% of borrowers have a credit score below 700,” Fitch stated in its report. “Some of the risk with these weaker-credit borrowers is offset by the high percentage of purchase loans (91%), high percentage of owner-occupied loans (99%) and the relatively low DTI (35%).”

The National Association of Mortgage Brokers announced a series of roadshows in partnership with Freddie Mac and Rocket Pro TPO.