The housing market is a warrior. The industry has fought many battles, gotten pushed down — even trampled on — and yet, it always manages to find its footing to take on the days ahead.

But the continued drag of employment numbers, coupled with housing demand constraints and extremely tight credit standards have led many industry experts to ask the question: Are we indeed on the path to yet another housing bubble?

The simple answer is, “Not yet,” but the factors leading to price increases, building gains and supply constraints are all troubling factors for Fannie Mae chief economist Doug Duncan.

“If there were was a signifi cant pick-up in demand driven by household income or employment growth and you started to see household formation expanding while those supply factors didn’t change, then you could see the emergency of a bubble,” Duncan argued.

However, it would be a different kind of bubble than experienced back in the financial meltdown heyday.

The market would see a temperate rise in rates above longterm levels because of constraints on the supply side of the housing market equation.

“What you would see is a fl attening out,” Duncan noted. “We’re not quite there yet, but you can make the argument that unless some of the supply side of the market contracts, there could be problems on the horizon.”

However, Eric Fox, Veros vice president of statistical and economic modeling, argues there are far too many differences between 2007 and 2013 to lead to another housing bubble.

Today, it’s people who have money who are driving housing prices higher. 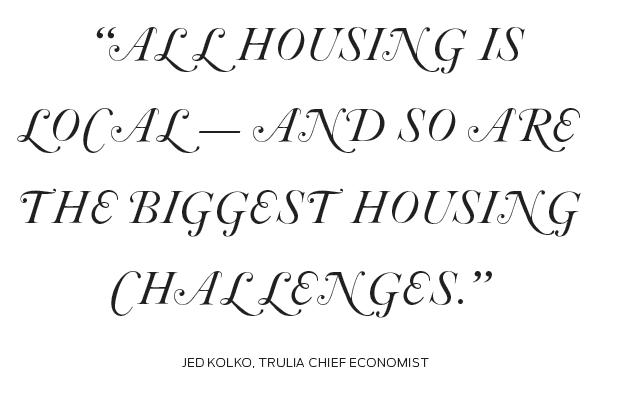 “It’s the people with money today who are saying ‘I really want this house so we’ll pay the extra $25,000,’ which then produces a new comp for the neighborhood and drives the prices higher,” Fox stated.

In the top performing markets, low housing supply, relatively low unemployment rates and rapidly growing areas are combining to cause home prices to trend higher. As a result, over the next 12 months, Fox expects to witness a 10% to 15% home price appreciation for the top five housing markets.

On the reverse side, he expects a drop between 1% to 3% in HPA for the bottom five housing markets.

“The levels of appreciation certainly are more moderate than we were forecasting in 2005 when market dynamics were generating 25% to 30% forecasts. Low double-digit appreciation is certainly sustainable,” Fox argued.

Nonetheless, Fox did admit that another housing bubble could occur, but he’s convinced that there is not evidence to support such a market shock at this time.

The Federal Reserve has maintained a supportive posture with the intention to put a floor under home prices. The central bank is the top purchaser of all new net issuance of mortgage-backed securities, which certainly has an impact on underlying prices in the secondary mortgage market.

While the market was shocked in October that the Fed did not begin to scale back its bond-buying program, many investors in housing are gearing up for the eventual tapering of its ultra-easy monetary program. And when that time comes, the market will experience a trade-off between rising rates and weakening appreciation.

“There’s not a strong correlation between interest rates and home prices, but to the extent that a rise in rates could reduce aff ordability, there may be an off setting slowing in the place of purchases that would moderate it,” Duncan explained.

The reason why the market might experience the exchange of rising rates for weakening aff ordability is due to consumers not shift ing over to adjustable-rate mortgages, which has happened the last two times the Fed has changed the pace of its monthly asset purchases.

The reason why this time is diff erent — which could be a leading factor to another bubble — is because underwriting standards are extremely tight currently.

Bottom line: As long as there is the presence of regulatory scrutiny, strict underwriting criteria is here to stay.

The Consumer Financial Protection Bureau rolled out the final definitions of both the QM and QRM standards this year to prepare lenders for the implementation of the rules by the start of 2014.

Such a dynamic shift in the market, coupled with the regulation of the new Basel III capital requirements, may produce a shift in home price appreciation due to a lack of consumers maintaining high enough credit criteria to achieve a mortgage, and more importantly, affordability.

Homeownership still remains elusive for the average American to achieve. Affordability continues to decline, especially in the markets that were least aff ordable to begin with, such as properties within California, explained Trulia Chief Economist Jed Kolko. For instance, rising prices and higher mortgage rates reduced aff ordability in Los Angeles to 24% in October, down from 34% a year ago.

“Even with the largest metros, affordability is a crisis in some neighborhoods and manageable in others,” Kolko stated. He added, “In parts of New York and California, affordability is the most pressing housing concern — even though mortgage rates are still well-below historical norms and buying is cheaper than renting. Yet elsewhere in the country, aff ordability is a distant worry compared with vacancies, foreclosures and sluggish local job growth. All housing is local — and so are the biggest housing challenges.”

For months, a handful of already pricey metropolitan areas that experienced relatively modest declines during the fi nancial crisis, but very robust gains during the recovery, have teetered closer to a housing bubble, according to Zillow. These markets — particularly California — risked potentially becoming unaff ordable for typical buyers as home values grew precipitously, mortgage rates rose and income growth failed to keep pace. 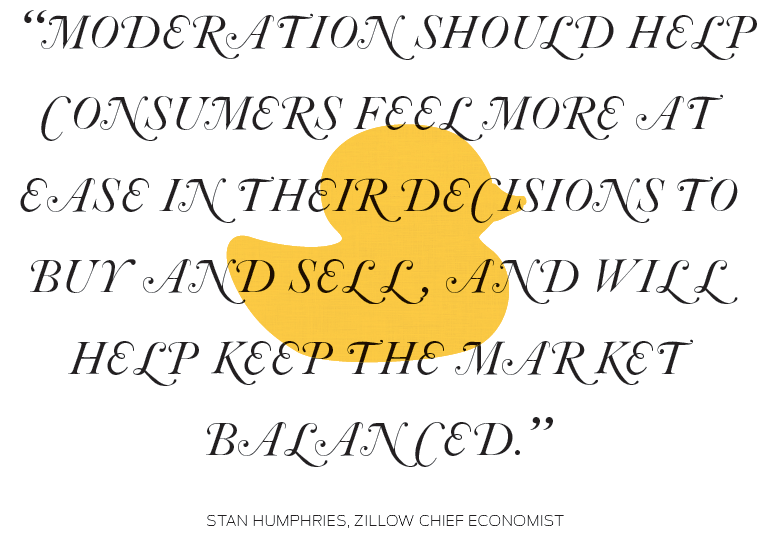 Consequently, the pace of home value appreciation in these markets needed to slow down or even fall in order for homes to remain aff ordable and to avoid a market bubble.

“Far from being a negative sign, we’re relieved to see more noticeable signs of cooling in the market,” said Zillow Chief Economist Stan Humphries. “If home values continued to rise as they have, relatively unchecked, we would almost certainly be headed into another bubble cycle, and nobody wants that.”

“This is more proof that the market recovery is entering a new phase, transitioning away from the bounce off the bottom we’ve been experiencing and fi nding a more sustainable level,” Humphries added. “This moderation should help consumers feel more at ease in their decisions to buy and sell, and will help keep the market balanced.”

Regardless of falling monthly appreciation, home values in most areas continue to grow year-over-year.

All 30 of the largest metro areas expected annual gains, with the largest coming in Sacramento, Calif., (34.1%), Las Vegas (33.3%) and Riverside, Calif. (31.8%), Zillow reported. Nonetheless, annual appreciation is expected to slow markedly over the next 12 months as moderation spreads, to an annual pace of 3.8% nationwide by September 2014.

In the run-up to the housing bubble and beyond, the market got ahead of what was sustainable as a national homeownership rate. Currently, the homeownership rate is below 65% and is expected to remain near a sustainable number as long as institutional investors continue to help migrate single-family properties into the rental sector.

“They [investors] are providing an important arbitrage in the market and there will be a sustainable model at a certain level,” Duncan explained.

For quite some time there has been a certain class of investors who own single-family properties, with single-family homes accounting for 29% of all rentals. Interestingly enough, Fannie’s economist believes that as interest rates continue to rise, the landscape will shift back to individual investors, versus institutional investors, as they choose to create a real estate investment trust and exit out of the market.

Investors find residential single-family real estate appealing because it is a largely untapped market from an institutional investor standpoint. The yields on single-family rentals are often higher than can be found on commercial or multifamily real estate, and on top of that there is the safety net of home price appreciation in this market that allows institutional investors a profitable quick exit, pointed out RealtyTrac Vice President Daren Blomquist.

“Right now the new source of demand could be accelerating home price appreciation, which is good for the recovery, but could become dangerous if home prices get out of whack with aff ordability,” Blomquist forewarned.

He continued, “Down the road, the new source of supply could result in an excess supply of investors hitting the market, potentially weakening home prices, if these owners don’t act responsibly in selling off their property.”

Earlier this year, home prices were rising at an unsustainably fast pace, so it’s important to remember that even with the recent price slowdown, prices are still rising at more than a 10% annualized rate, noted Trulia's Kolko.

While the market is currently not at risk of a bubble, if prices were to rise 10% a year for the next three years, the market would witness a bubble boom.

2014 is expected to usher in several pivotal shift s in the housing market, including the dominance of the repeat homebuyer, predicts Jed Kolko, chief economist with Trulia. Kolko is convinced that in the absence of more traditional property purchasers, there will still be some scope to contribute meaningfully to the housing market.

In addition to the prominence of the repeat buyers, Kolko believes next year will also see housing aff ordability worsen, the homebuying frenzy die down and a slowdown in rising home prices. Furthermore, rental action will swing back toward urban apartments. This could offer a huge investment advantage for multifamily homebuilders, real estate investors and property managers.

“Single-family rentals are peaking, and we are already seeing investor purchases declining,” Kolko noted. “There will likely by a decline in the homeownership rate next year since 18-34 year olds will be moving into rentals. The homeownership rate will decline or at least be stagnant, even though what is beneath that should be a healthy moment of young people moving out of their parents’ houses into places they rent themselves."

However, he did advise caution on several areas that may prove to be wild cards in 2014, including job and income growth, the eff ect of new mortgage rules and the constant changes in Washington, D.C.

“Already we are starting to see some policy moves that are reducing the government role in the market,” Kolko said. “They could be trial balloons or the first steps on a long path towards moving the government out of the mortgage business. But I do not think this will get resolved or even more clarified in the next year.”

“Throughout 2013, the housing recovery has progressed on most fronts but remains unbalanced. Of the five key indicators that Trulia’s Housing Barometer now follows, three are on track towards a full recovery,” Kolko said.

The two lagging in terms of entering a recovery are new construction starts and the employment rate, which are only 36% and 23% of the way back to normal, respectively.

But the good news is non-distressed sales, price levels and the delinquency and foreclosure rates are on track toward a full recovery, with those indicators standing at 79%, 71% and 59% of the way back to normal, respectively.

Prices may have heated up in recent times, but given the data and context surrounding recent price gains, now is time to end this talk of a housing bubble.