Are digital closings really worth it?
Rachel Luna to speak at HW Annual Oct. 4
Learn from lenders: how to navigate this challenging market through tech
Growing your community during a down market

In the last 20 years, the U.S. has seen an average of almost seven events per year that each produce damage in excess of $1 billion, and 2018 marked the third consecutive year of higher than average natural hazard event losses.

Hurricane Florence, a massive Category 1 storm at landfall, drenched North and South Carolina in rainfall-induced flooding in. Hurricane Michael, a Category 5 storm, caused $3 to $5 billion in losses in 2018. The Camp and Woolsey Fires burned hundreds of thousands of acres, claimed many lives and caused between $15 and $19 billion in losses.

And that was just in the U.S. These events, which globally included flooding, hurricanes, wildfires, severe convective storms, earthquakes and more, caused significant loss and damage to homeowners and businesses left dealing with the catastrophic aftermath.

To prepare for future catastrophes we must first look to the past, focusing on the high-impact perils of flooding, hurricanes, wildfire, severe convective storms and earthquakes.

As the trend of catastrophic losses continue to rise with events like Hurricane Harvey in 2017, the Camp Fire in 2018 and the North Bay Fires in 2017, it becomes more and more important for homeowners and businesses to know their risk to accelerate their recovery.

Flooding is the No. 1 natural disaster in the U.S., unique in its ability to affect any location. In 2018, there were over 1,600 significant flood events that occurred in the U.S., 59% of which were flash flood-related.

Some of the most devastating floods in recent years have been associated with hurricanes. In 2017, Hurricane Harvey, a Category 4 storm at landfall, stalled over the Greater Houston Metropolitan Area and caused massive precipitation-induced flooding. An estimated 500,000 parcels were flooded, a majority of which saw damage.

CoreLogic estimated that Harvey had caused between $25 billion and $37 billion in damage to residential and commercial properties, with 70% of them uninsured.

This trend repeated in 2018 when Hurricane Florence, a massive Category 1 hurricane slowly trudged over North Carolina, South Carolina and Virginia, 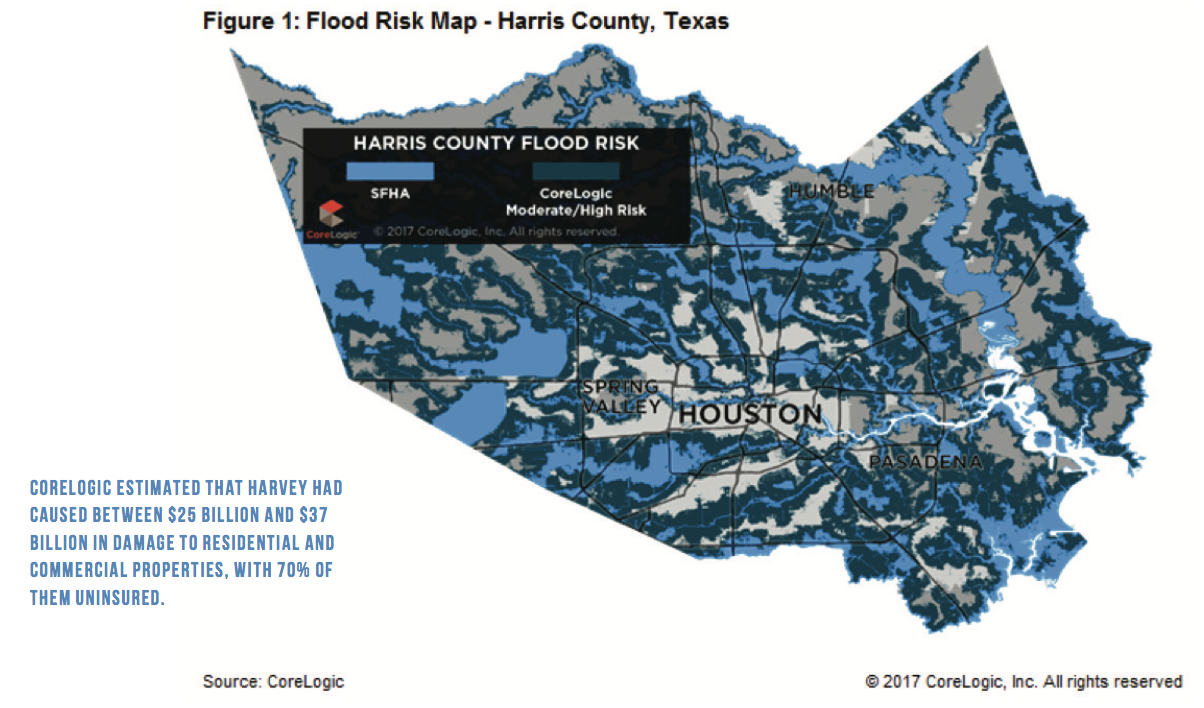 causing massive flooding. CoreLogic estimated flood damage to residential and commercial properties ranged from $19 billion to $28.5 billion, of which roughly 85% of residential flood losses were uninsured.

Because of their frequent and indiscriminate nature, flood damage represents a risk to all. Most properties in the U.S. have at least some risk of damage from flooding coastal storm surge flooding, like in Hurricane Katrina in 2005, riverine flooding and off-plain or flash flooding risk exposes every state in the U.S.

It is estimated that less than 4% of homes in the U.S. have a flood insurance policy, usually through the National Flood Insurance Program. Established in 1968, the NFIP offers flood insurance to residents in communities that adopt floodplain management ordinances to guide development. It is regulated by the Flood Disaster Protection Act of 1973 and the Flood Insurance Reform Act of 1994 and indicates that homebuyers within a designated special flood hazard area must purchase flood insurance in order to obtain a home loan.

Still, flood risk can and does impact properties outside of a SFHA, as seen in the cases of Hurricanes Florence and Harvey. With the upward trend in catastrophes year-over-year, it’s more important than ever for homeowners and businesses to understand the risk they face, and for their insurer to educate and guide them to making decisions based on accurate, granular data.

A 2016 CoreLogic study showed that 1.8 million single-family homes across 13 states in the western U.S. exhibit an extreme or high wildfire risk of wildfire damage. Cumulatively, this represents a total reconstruction cost value of nearly $500 billion. In addition, 27 million properties, with an estimated RCV of $6.7 trillion, are designated with a moderate to low risk of wildfire damage. These categories are based on the CoreLogic Wildfire Risk Score, which assigns a value between 5 and 100 to individual properties. It does so by not only combining the risk rating, but also factoring in proximity to higher risk areas that could affect the property via windblown embers. In addition, it considers slope, aspect, vegetation/fuel and surface composition.

2017 and 2018 were two of the most devastating wildfire years in U.S. history. A total of 11 western states had at least one wildfire that exceeded 50,000 burned acres; the leading states were California and Oregon, each with seven fires that burned more than 50,000 acres.

Historically, wildfire has been managed through the designation of the Wildland-Urban Interface zonation process. In California alone, almost 4.5 million homes, representing almost one-third of California housing units, are in the WUI zone, according to the Silvis Lab at the University of Wisconsin-Madison. The 2017 fires in Sonoma County, California remind us that homes in areas adjacent to the WUI are at risk.

Wildfire is a unique peril in that it can and does cause 100% destruction, resulting in the total loss of a home and all its contents. The 2018 Camp Fire destroyed over 18,000 structures and took more than 80 lives. Many of the homes, like in the case of those in Paradise, California, will never be rebuilt, giving extended clarity for the need to be protected. Adequately assessing the reconstruction value of a home is paramount for homeowners and insurance carriers to gain an accurate understanding of the components and price to rebuild. 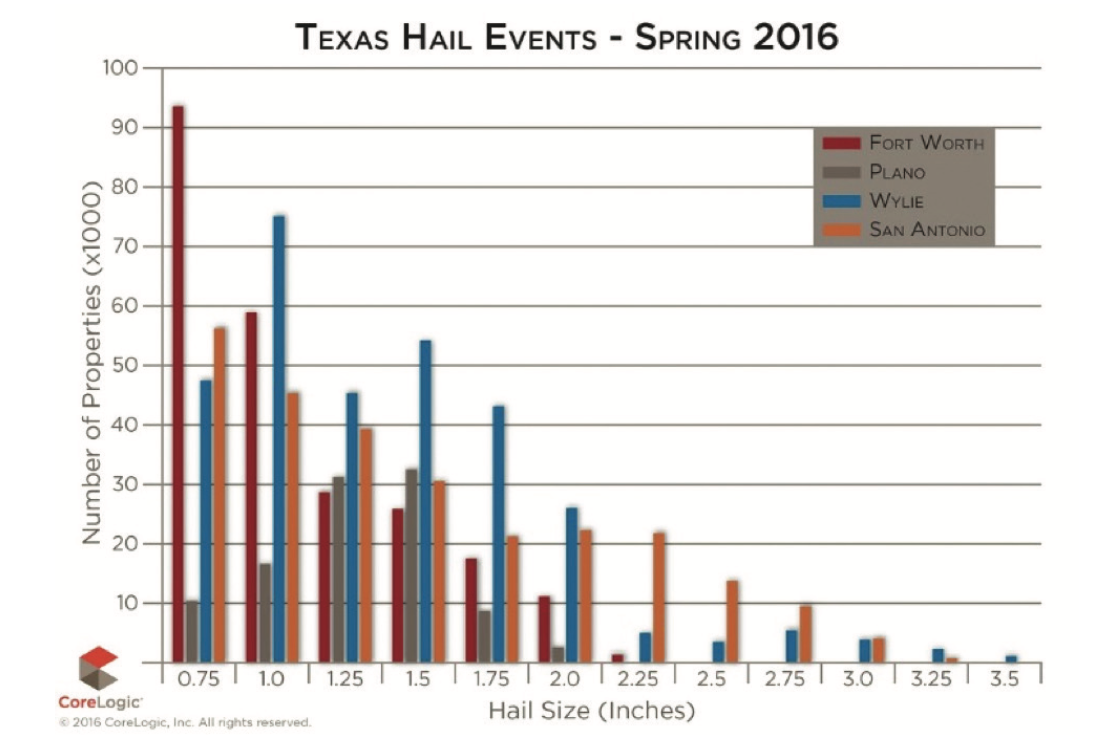 untry but are concentrated east of the Rocky Mountain continental divide. With the dramatic damage from winds that can exceed 150 mph, tornadoes are the most frequently recognizable aspect of severe convective storms though hail storms are possibly the costliest.

The geographic distribution of tornado touchdowns is shown in the map below from the National Oceanic and Atmospheric Administration. The average annual number of tornadoes in the US from 2005 to 2015 is 1,402, but there is great variation in the annual counts with 2008 seeing 2,194 tornadoes and 2013 seeing only 943 tornadoes.

Hailstorms are very damaging to property. Hail arrives to the surface as frozen precipitation, and the kinetic energy in a hail stone that could be four inches or more in diameter can do significant damage to automobiles, windows, the roofing and siding of a home and sometimes damage to the underlying structure.

In a two-month period in the spring of 2016, CoreLogic documented four storms in Texas alone that cumulatively impacted more than 900,000 homes with hail. The estimated damage to residential homes for those four storms exceeded $700 million, with damage to automobiles and commercial construction contributing to an expensive summer for Texans. 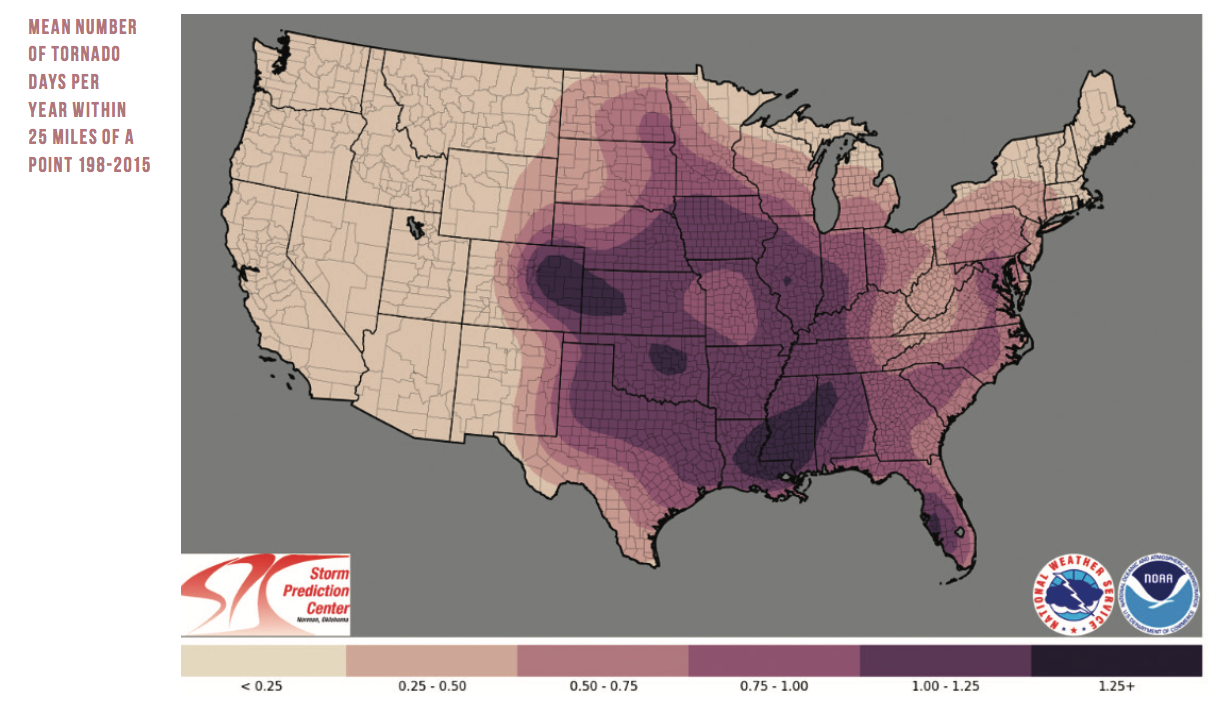 Hail-resistant roofing and siding products are being introduced for this high-frequency loss peril and owners of older homes in the severe convective storm regions should consider strengthening their homes to reduce the likelihood of a loss to their property.

The risk of a damaging earthquake is not always top of mind. While there have been many small shakes and events like the 2011 Virginia and 2014 Napa earthquakes that have caused some damage, the last time the country experienced a major loss from an earthquake was 25 years ago during the 1994 Northridge earthquake in the Greater Los Angeles area.

The risk of a catastrophic earthquake is real. A 2014 study, the California Uniform Earthquake Rupture Forecast – Version 3, notes that while highly unlikely, it is possible that the full length of the San Andreas fault could rupture in a massive earthquake – from Humboldt County in northern California to Imperial County near the Mexico border. This fault runs through high populous areas such as the San Francisco Bay Area and the Greater Los Angeles area. CoreLogic demonstrated that between 2 million and 3.5 million single-family homes could be damaged in an earthquake of magnitude 8.0 or higher along the San Andreas fault and could result in a total RCV of more than $289 billion, and a damage value from $180 billion to $190 billion for a worst-case San Andreas scenario with a magnitude 8.3.

While this earthquake would have a very broad impact, there are many other earthquakes that could occur on smaller, local faults that could be even more damaging and, while still low, are a higher probability than the full rupture of the San Andreas. The 2018 HayWired Scenario conducted by the U.S. Geological Survey looks at a hypothetical magnitude 7.0 earthquake followed by 16 aftershocks ranging from 5.0 to 6.4 along the Hayward Fault in the San Francisco East Bay. For this scenario, CoreLogic analysis showed that more than 1.1 million homes would be likely to sustain visible damage and cause an estimated $170 billion in total losses, with only a small fraction of those damages insured. 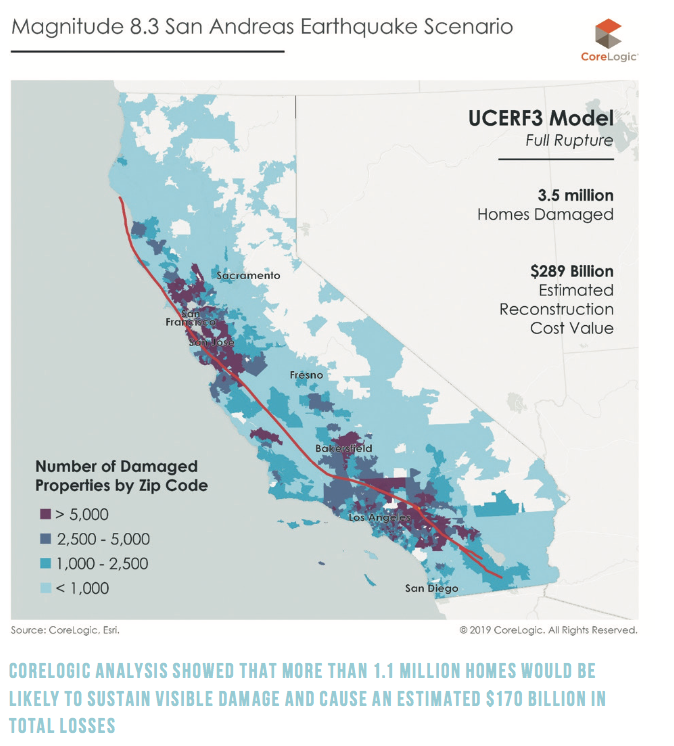 Because of the infrequent nature of large, damaging earthquakes the average homeowner often doesn’t believe the risk will ever impact them personally. As with all hazards, the first step to preparedness is to understand the risk.

In California, where the earthquake risk is greatest in the country, the Alquist-Priolo Earthquake Fault Zoning Act requires a buyer to be notified if property is in a defined Earthquake Fault Zone. These zones are a map of known active faults and the expected surface area rupture only along the fault. It is important to note that these are a first approximation and the risk extends beyond these zones.

There are many steps to take to personal preparedness, including making an emergency kit and having an emergency plan. FEMA and Outsmart Disaster, a California multi-agency coalition, offer suggestions on how to get prepared. When it comes to protecting your property the California Earthquake Authority offers incentives for earthquake insurance for properties that are retrofitted.

Earthquake damage is not covered as part of a standard homeowners’ insurance policy, but an earthquake insurance endorsement can be purchased separately. The California Earthquake Authority offers a number of different options for policy holders, both homeowners and renters.

Know your risk, accelerate your recovery

For the average homeowner, the risk of their property to natural disasters is invisible without the intimate details of risk at a location. There are several publicly available sources for understanding your risk, yet still the average person is unaware of the risks that may be upon them.

When homeowners are without insurance, they are forced to use their savings or a loan to finance the repairs to restore their homes. Or, in some cases, their homes don’t get repaired at all. The ramifications of uninsured damage to properties can lead to delinquent mortgages and ultimately foreclosure on damaged collateral. The absence of funds to repair properties systemically weakens our communities. Even families who repair their home or those in homes that were undamaged are impacted in the long run. FEMA’s flood zone designations are publicly available. Homeowners can work with insurance carriers to find the right coverage based on the right science to protect them financially.

The ability to recover after an event is crucial to the development of a resilient society. Our ability to recover can be improved by strengthening our homes and buildings or by setting aside the financial resources necessary to rebuild, usually through the purchase of insurance.

If in a flood, hurricane, wildfire or earthquake risk zone, borrowers should take the necessary steps to prepare their home. The Institute of Business and Home Safety introduced its Fortified Home program with construction standards designed to help protect home from severe weather disasters. The California Earthquake Authority introduced the Earthquake Brace and Bolt program with financial incentives to retrofit your home from earthquake damage. With stronger homes, we can see less damage.

Whether it be investigating FEMA flood zones or Alquist-Priolo earthquake fault zones or working with their insurer to better understand their exposure to natural hazards, there are a variety of steps home and businessowners can take to ensure they are covered.

The ongoing uncertainty about the impact of the Fed’s reduction of its mortgage backed securities and Treasury holdings is adding to the volatility in mortgage rates, the MBA said Wednesday.