In June, the nation’s home-price gains fell to the lowest level in nearly seven years, according to the latest Case-Shiller Home Price Index from S&P Down Jones Indices and CoreLogic. June 2019 saw an annual increase of 3.1% for home prices nationwide, falling from  the previous month's pace of 3.3%,  according to the report.

“Home price gains continue to trend down but may be leveling off to a sustainable level,” S&P Dow Jones Indices Director and Global Head of Index Governance Philip Murphy said. “The average YOY gain declined to 3% in June, down from 3.1% the prior month. However, fewer cities experienced lower YOY price gains than in May.”

Phoenix, Las Vegas and Tampa unsurprisingly reported the highest year-over-year gains among all of the 20 cities, according to the report.

“The southwest (Phoenix and Las Vegas) remains the regional leader in home price gains, followed by the southeast (Tampa and Charlotte),” Murphy said. “With three of the bottom five cities (Seattle, San Francisco, and San Diego), much of the west coast is challenged to sustain YOY gains. For the second month in a row, however, only Seattle experienced outright decline with YOY price change of -1.3%.”

“The U.S. National Home Price NSA Index YOY price change in June 2019 of 3.1% is exactly half of what it was in June 2018,” Murphy said. “While housing has clearly cooled off from 2018, home price gains in in most cities remain positive in low single digits. Therefore, it is likely that current rates of change will generally be sustained barring an economic downturn.”

The graph below highlights the average home prices within the 10-City and 20-City Composites: 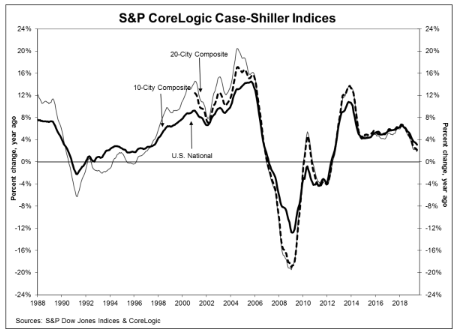 Lenders, are you prepared for 2022’s challenges?