The average credit score of borrowers who refinanced mortgages in July with loans backed by Fannie Mae and Freddie Mac rose to a six-year high, according to an Ellie Mae report. The score was 750, up from 742 in June.

Low mortgage rates are attracting more creditworthy borrowers who are looking to improve their household balance sheets by lowering their monthly bills. About 9.7 million mortgage borrowers are “refi eligible,” meaning there’s at least a 0.75% difference between the financing costs they currently have and mortgage rates now available, according to Black Knight. Those borrowers would save an average $267 a month on their mortgage bills, measuring just principal and interest, Black Knight said earlier this month.

The average FICO score of people getting purchase mortgages backed by Fannie Mae and Freddie Mac was 754. That matched the average rate of the prior two months that was the highest since mid-2017, according to Black Knight data.

Looking at all mortgage borrowers, the average FICO score was 731, matching the almost three-year high of the prior month, according to Ellie Mae.

The higher FICO scores weren’t the result of any significant tightening in lending standards. While the Mortgage Credit Availability Index that measures how easy it is to get a loan dipped in July, it was just 0.4% below June’s record high, according to Mortgage Bankers Association data going back to 2007. (See chart below.)

The nation’s tight labor market is helping more Americans pay their bills on time. The unemployment rate in July was 3.7%, matching the prior month. In April and May, the rate was 3.6%, the lowest since the 1960s, according to the Bureau of Labor Statistics.

The demand for workers is also helping wages to rise, which improves the quality of mortgage borrowers. U.S. median annual household income in June was $64,430, up 0.9% from the prior month and 1.8% higher than a year earlier, according to a report from Sentier Research based on inflation-adjusted Census Department data.

“Real median household income has continued to display an upward trend over the past 12 months (up 1.8%), and especially since the low point reached in June 2011 (up 15.9%),” Gordon Green of Sentier Research said in the report. 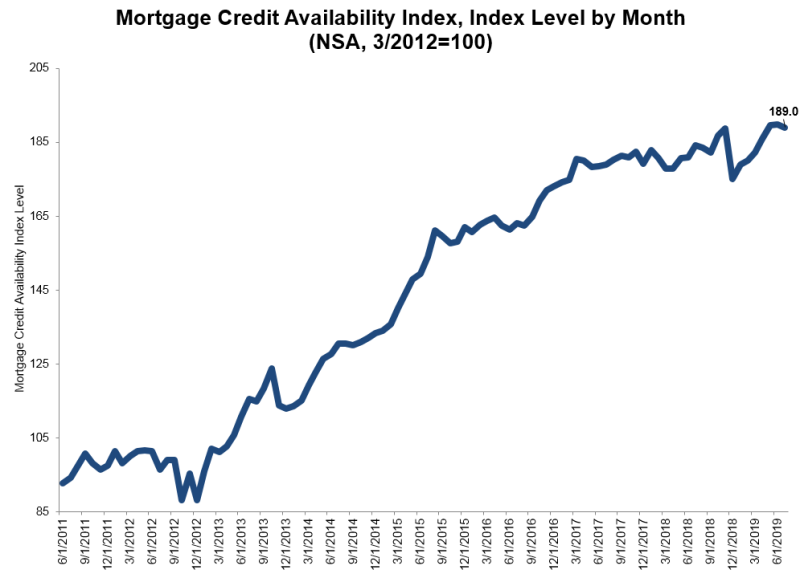