Many major markets have seen a slow down in multifamily construction growth – slowing to the lowest level it’s been in almost four years, according to a new report from RealPage.

Although apartment construction saw a boom last year, it is expected to continue to decline. 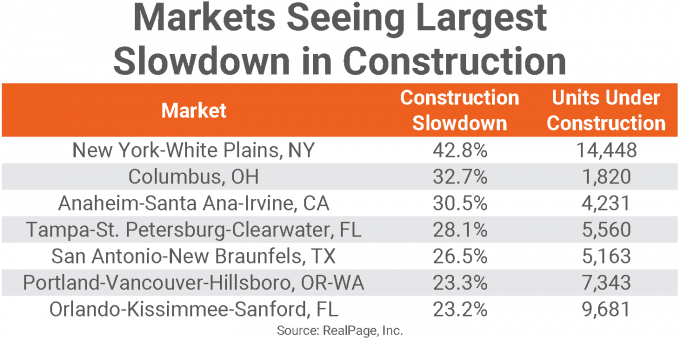 RealPage said that level of construction is still far above what’s normal for the U.S. market, almost doubled the long-term norm. Multifamily permits also dropped in June to its lowest level in over two years, according to the Bureau of Labor Statistics.

New York’s market has seen the biggest slow down, with 42.8% fewer apartments being built than the year before. Some of the reasons behind the slow down is high construction costs and lack of skilled labor, RentCafe reports.

Despite the projected slowing down of construction, there are some metros expected to see more building than others.

The Dallas-Fort Worth metro area has seen the most apartment growth, with a total of 22,196 multifamily units expected to be built in 2019. Trailing DFW is Seattle, expecting 13,682 units to be built this year.

Mortgage applications gained 5.1% last week as mortgage rates continue to hit record lows, according to a report by the Mortgage Bankers Association.