Low mortgage rates have made 8.2 million U.S. mortgages “refi eligible,” meaning borrowers would save money by getting a new home loan even with the application and funding costs, according to Black Knight.

The size of the “refinanceable population” could fluctuate with even small movements in the rate, Black Knight said in a report on Monday. The mortgage data firm measures loans that are at least 0.75% higher than currently available rates.

Fannie Mae is forecasting U.S. rates for 30-year fixed mortgages probably will average 3.7% this quarter and every quarter through the end of 2020, according to projections released last month.

“Mortgage rates have continued to decline,” Fannie Mae said in its July forecast. “The 30-year fixed mortgage rate averaged 3.80% in June, down from 4.07% in May and the seventh straight month of decline.”

“This continued decline in mortgage rates and our upwardly revised view on house price growth have led us to increase our forecast for single-family mortgage originations for the remainder of the year,” Fannie Mae said. “We now expect total originations to rise 7.0 percent from 2018 to $1.75 trillion, and we expect refinances to account for 32 percent of total mortgage originations in 2019, up from 29 percent in 2018.” 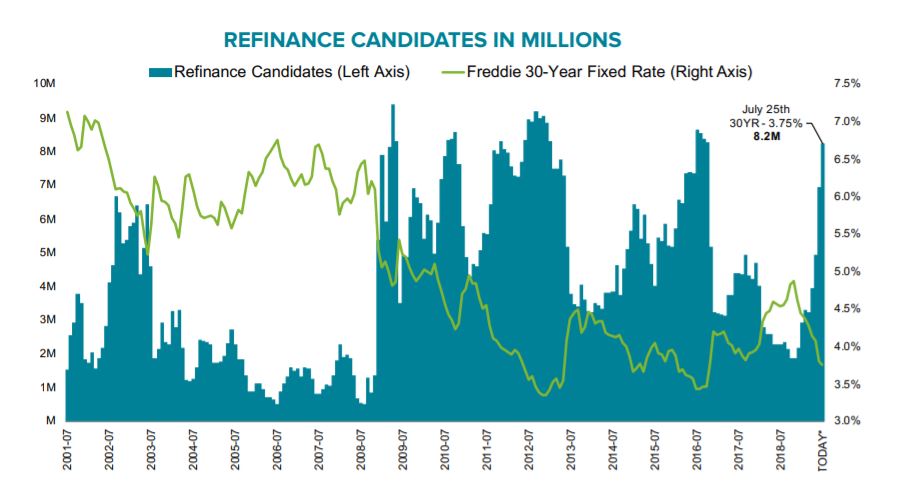