Some say that anticipated wave of Millennial homebuyers has finally crashed, with realtor.com data showing that 45% of all new mortgages last year were connected to a member of this generation.

Now, a new study shows us where they're landing, pointing out the most popular destinations for Millennial homebuyers.

The state that ranks the most attractive to these young nest seekers? Washington. This state topped the list for having the greatest "net migration," which calculates the number of Millennials who moved to the state versus those who moved out of the state. Behind Washington came Texas and Colorado.

In fact, the SmartAsset study shows that many Millennial homebuyers are headed West and South, with all of the top 10 most popular cities located in these regions of the U.S.

On a city level, Dallas nabbed the top spot for the most popular destination, followed by Seattle and Portland.

The states with the highest number of incoming Millennials, which does not take into account the number of Millennials moving out, were North Carolina, New York, Florida, Texas and California, SmartAsset revealed.

A second study, by Experian, also indicates the sizable impact Millennials are likely to have on the mortgage market, noting that they are on pace to hold more mortgage debt that any of their peers.

In the first quarter of 2019, Millennials held an average of $222,211 in mortgage debt, the study revealed. This is a 5% increase from last year and the outpaces mortgage debt growth of any other generation.

Here two charts from SmartAsset showing where Millennials are likely to build up all that mortgage debt: 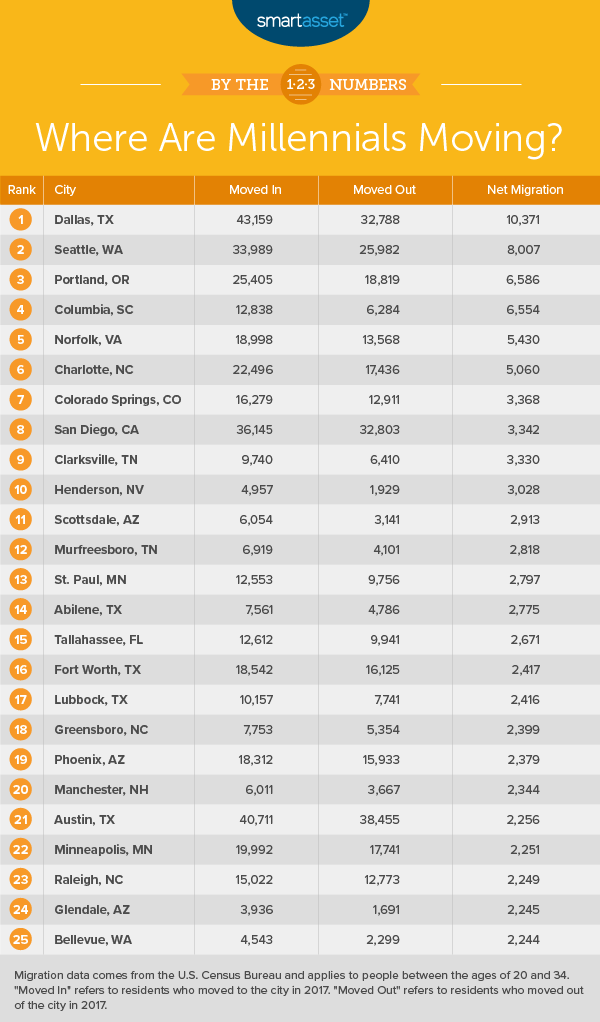