In May, the nation’s home-price gains continued to slow in many markets across the country, according to the latest Case-Shiller Home Price Index from S&P Down Jones Indices and CoreLogic.

May 2019 saw an annual increase of 3.4% for home prices nationwide, sliding from the previous month's pace of 3.5%, according to the report. 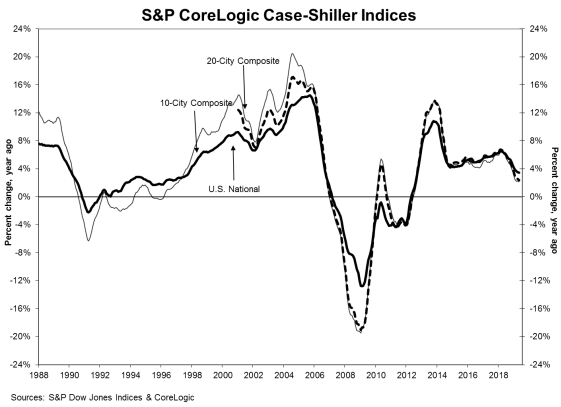 S&P Dow Jones Indices Director and Global Head of Index Governance Philip Murphy said annual home price gains were lower in May than April, but not dramatically so and a broad-base moderation continued across the country.

“Though home price gains seem generally sustainable for the time being, there are significant variations between YOY rates of change in individual cities,” Murphy said. “Seattle’s home price index is now 1.2% lower than it was in May 2018, the first negative YOY change recorded in a major city in a number of years. On the other hand, Las Vegas and Phoenix, while cooler than they were during 2018, remain quite strong at 6.4% and 5.7% YOY gains, respectively.”

Las Vegas, Phoenix and Tampa once again reported the highest year-over-year gains among all of the 20 cities, according to the report.

“Whether negative YOY rates of change spread to other cities remains to be seen; for now, there is still substantial diversity in local trends,” Murphy said. “Nationally, increasing housing supply points to somewhat weakened demand, but the fact that seven cities experienced stronger YOY price gains in May than they did in April suggests an underlying resiliency that may mitigate the risk of overshooting to the downside at the national level.”

Why female leadership is crucial to the mortgage industry

Women in brokerage aren’t common, but Rocket Pro TPO aims to change that. By integrating programs that enhance inclusivity, the company encourages female leadership. HousingWire recently spoke with Keri Stichler about why female leadership is crucial in the mortgage industry and how companies can advocate for inclusivity.