In April, America’s home prices continued to appreciate slowly, according to the latest Case-Shiller Home Price Index from S&P Down Jones Indices and CoreLogic.

The report's results showed that April 2019 saw an annual increase of 3.5% for home prices nationwide, slowing from the previous month's pace of 3.7%. 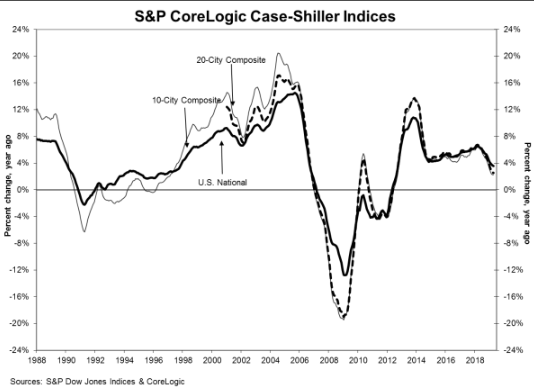 “Year-over-year price gains remain positive in most cities, though at diminishing rates of change,” Murphy said. “Seattle is a notable exception, where the YOY change has decreased from 13.1% in April 2018 to 0.0% in April 2019.”

According to the report, Las Vegas, Phoenix and Tampa reported the highest year-over-year gains among all of the 20 cities.

Murphy said other industry statistics are consistent with his observation, which may indicate the market is normalizing.

“For example, the national supply of housing is trending upward and suggesting weaker demand. Perhaps the trend for the moment is toward normalization around the real long run average annual price increase,” Murphy said. “Comparing the YOY National Index nominal change of 3.5% to April’s inflation rate of 2.0% yields a real house price change of 1.5%  — edging closer to the real long run average of 1.2% cited by David Blitzer last month.”