Reverse mortgage volume has been rather abysmal as of late, and second quarter data from the Department of Housing and Development doesn’t provide many bright spots.

In its Q2 report to Congress on the state of the Federal Housing Administration’s flagship Mutual Mortgage Insurance Fund, HUD reveals that the reverse mortgage program continues to be a drain.

The subsidy rate for reverse mortgages in the last quarter held steady at -0.15%, a mark it hit in the first quarter of the year after holding onto a subsidy rate of -0.49% for all of 2018.

The higher the negative subsidy rate, the more money the government makes off the program. The closer a program’s subsidy rate gets the zero, the less profitable it is for Uncle Sam.

The subsidy rate is significant because the reverse mortgage program has long been criticized for its cost to taxpayers as FHA has repeatedly been forced to dish out funds to make up for its losses.

Part of the problem is the massive wave of reverse mortgage claims HUD has had to pay out. In recent quarters, claims have spiked as a sizable chunk of HECMs originated during the program’s peak reached maturity.

But perhaps this will ease up, as the report reveals that HECM program claims decreased last quarter by 23.11% – falling from 23,718 to 18,236 loans. As the number of claims assigned to HUD tapers off, the program could become less of a drain.

Program changes issued in 2017 were designed to stop the bleeding and solve some of the product's other issues. But of course, they were not without their consequences.

The new guidelines have largely stifled the program, limiting the pool of eligible borrowers and slashing lender profits to a drastic degree, sending some fleeing the business while others scramble to revise their models to stay profitable.

The latest report details the hit reverse mortgage endorsements have taken as a result of it all.

While it does show that endorsements were up in Q2 – rising 11.32% to a total of 8,222 loans – a historical look at volume reveals how limp this total truly is.

And, lest you get too excited about the uptick and try to call it a sure sign of a rebound, note that the government shutdown in the first quarter of the year likely pushed endorsements back into Q2, attributing for some, if not all, of this gain.

To get a better understanding of the state of the program, here is a breakdown of recent HECM endorsements by quarter:

Here is a chart from the report illustrating HECM endorsements counts by quarter:
(Image courtesy of the FHA) 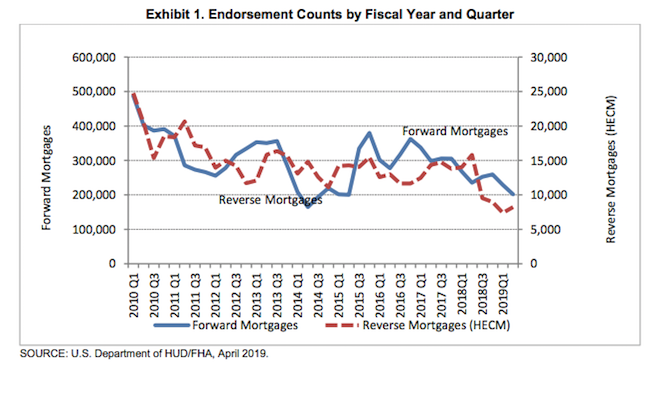