In March, the average home rose 1% in value from the same time period in 2018, marking the 13th consecutive month of slowing home price appreciation, according to the latest report from Black Knight.

March’s slight increase pushes the annual rate of appreciation to 3.8%, which also marks a seven-year low.

“In what is usually the calendar-year high point for home price gains, month-over-month appreciation in March 2019 was just 1%, down from 1.25% at the same time last year,” Division President Ben Graboske said. “Likewise, the annual rate of appreciation has now slipped to 3.8%, the first-time annual home price growth has fallen below its 25-year average of 3.9% since 2012.”

Black Knight claims this deceleration is attributed to rising interest rates, which began to reduce price acceleration in February of last year. Since then, the situation has intensified as affordability levels grow closer to their long-term averages.

And although mortgage interest rates have begun to decline, even reaching 3.99% last week, the company claims the housing market won’t likely feel the impact until May or June.

That being said, that doesn’t mean homeowners aren’t benefiting, as the report highlights that falling rates have already had a positive impact on affordability.

According to Black Knight’s data, the monthly payment required to purchase the average-priced home with a 20% down payment fell by 6% in the last six months.

“That’s the lowest payment-to-income ratio in more than a year as well, and far below the long-term average of 25.1%,” the report said. “That the market reacted in terms of slowing home price growth even before we hit that long-term average suggests that a 25% payment-to-income ratio may not be sustainable in today’s market, whether due to excess non-mortgage related debt, lending standards or other factors.”

Here is a map illustrating the payment-to-income ratio across the country: 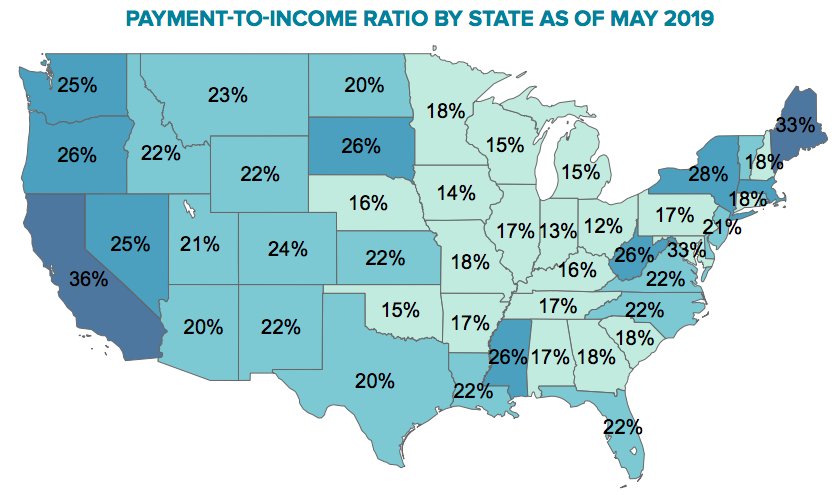