A year after implementing a tax reform bill that lowered caps on tax deductions permitted for mortgage payments and state and local taxes, Redfin reports that less than half of homebuyers say it impacted their home searches.

According to the company, 47% of homebuyers say the bill has affected their home search, falling from last year’s rate of 56%.

This data was gathered from a survey Redfin conducted back in March, consisting of 1,800 Americans who planned to buy or sell a home within the next 12 months.

Notably, Redfin compared this year’s results to a similar survey conducted in March 2018, which is when tax reform’s effects were mostly speculative.

“Compared with the effects homebuyers reported a year ago, we saw the biggest drops in the prevalence of buyers indicating that they were better off because of tax reform,” Redfin writes. “This year, 8% of respondents said they are searching for higher-priced homes because the new tax law gives them additional income, down from 17% last year.”

Additionally, Redfin discovered 11% of buyers this March said they decided to buy a home because the new tax law gives them additional income, falling from 19% in the March 2018 survey.

However, Redfin indicates 14% of homebuyers said they were forced to lower their price range, making it the most common tax-reform effect reported.

Redfin Chief Economist Daryl Fairweather said last year more homebuyers were worried that tax reform would hurt their homebuying budgets, but it turns out tax reform wasn’t all bad or all good for homebuyers.

“Some homebuyers, especially in low-tax states, are now paying less in taxes overall, which has left them with more cash for a more expensive home. For others, not being able to deduct as much of their property taxes or mortgage interest from their taxable income was the other shoe that needed to drop to make them pick up and move to a more affordable area,” Fairweather said. “In the long run, we will see demand for luxury homes in high-tax states suffer the most because those homes have been hit the hardest by this tax reform, and there’s actually early evidence of that already happening.”

The image below highlights how tax reform is impacting home searches: 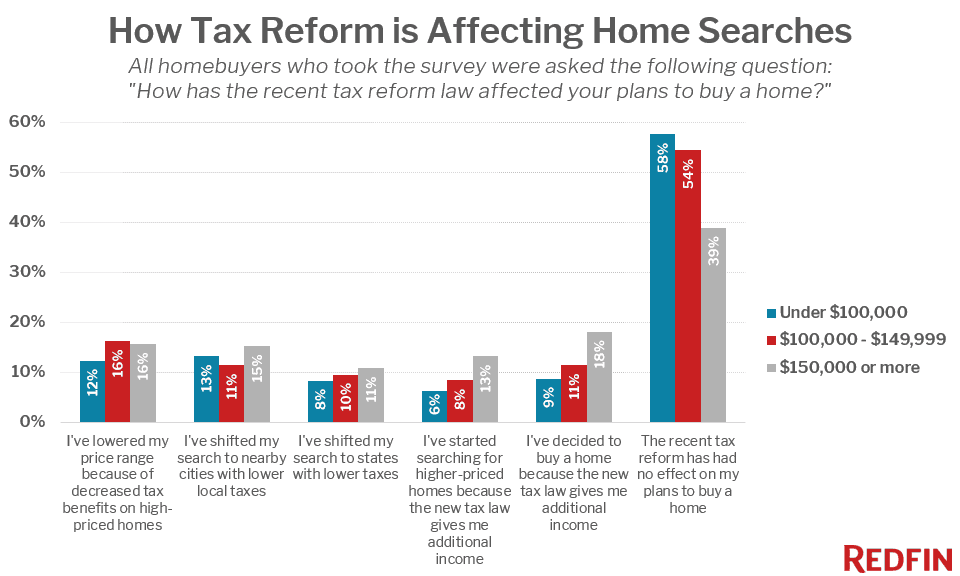 Wells Fargo announced updates to is non-conforming refinance products at the beginning of July. While the updates loosen the jumbo requirements for current customers, the new standard for customers without a Wells Fargo relationship increased four times the amount it originally announced back in April.