At the end of last year, the length of time that a homeowner stayed put hit a record high at an average of 8.17 years. But the latest data from the first quarter of 2019 reveals that the average tenure has begun to backslide as more Americans opt to relocate.

Homeowners who sold their home in Q1 2019 had owned their property for an average of 8.05 years, according to the latest from ATTOM Data Solutions.

While this is down slightly from the previous quarter, ATTOM points out that it is up from the 7.75-year average seen in Q1 2017.

It’s also significantly longer than the average tenure seen in the years leading up to the housing bubble. Between 2000 and 2007, homeowners moved an average of just 4.21 years, ATTOM revealed.

It seems homeowners in certain cities are more likely to relocate, with several metroes seeing tenure fall below the national average, including Kansas City, Tucson, Boston, Orlando, and Oklahoma City.

There were also several major metropolitan areas that had the tenures much longer than average. 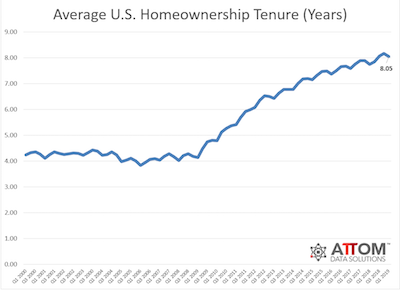 TTOM’s chief product officer, said the spring buying season will shed more light on whether this is simply a blip on the radar a trend worth watching.

“We are starting to see homes sales prices and profit margins softening for the nation, and the average homeownership tenure did see a slight dip from last quarter,” said Todd Teta, chief product officer at ATTOM Data Solutions. “However, home prices are still above pre-recession peaks in 59% of local markets, and as the buying season starts to kick into gear, the next few months may provide even more answers to the question of whether a lasso is indeed around the market or if the recent trend is a temporary bump in the ride.”