The National Employment Report indicates that private sector employment increased by 275,000 jobs from March to April, according to the ADP Research Institute and Moody’s Analytics.

“April posted an uptick in growth after the first quarter appeared to signal a moderation following a strong 2018,” ADP Research Institute Vice President and Co-head Ahu Yildirmaz said. “The bulk of the overall growth is with service providers, adding the strongest gain in more than two years.”

Additionally, the report revealed that the number of jobs added in March was revised upward from 129,000 to 151,000. 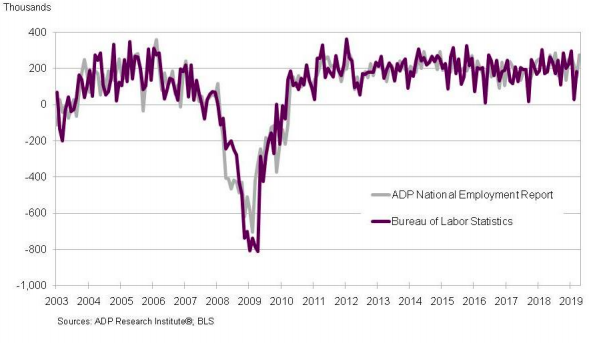 Notably, the report said construction jobs grew from last month, and overall the goods-producing sector is predicted to increase by 52,000 jobs.

Below is a breakdown of job segments that saw changes in employment between March and April:

The service-providing sector is predicted to increase by 223,000 jobs, including:

“The job market is holding firm as businesses work hard to fill open positions,” Moody’s Analytics Chief Economist Mark Zandi said. “The economic soft patch at the start of the year has not materially impacted hiring. April’s job gains overstate the economy’s strength, but they make the case that expansion continues on.”