Is the recent surge in rental growth an indicator of tightening rental markets?

In March, rental growth increased to 3.7% from last year, a 12-month high, according to the latest Consumer Price Index.

According to a new report from Capital Economics, analysts are optimistic about the rental market’s outlook but were surprised at the boost in growth. So, what’s behind this acceleration and will it continue?

CE said it suspects the recent rise in earnings growth may be the cause.

“Instead, and in contrast to what we had expected, the rise in earnings growth to a 10-year high looks to have given landlords some latitude to increase rents for existing tenants,” the analysts wrote in their report, which cites data from the Census Bureau, Zillow, Reis, and Refinitiv. “That will support rents this year but, with earnings growth then set to slow, annual rental growth will end 2020 at around 3.2%.”

The chart below shows rental growth across Refinitiv, Zillow and Reis measures. (Click to enlarge; image courtesy of Capital Economics) 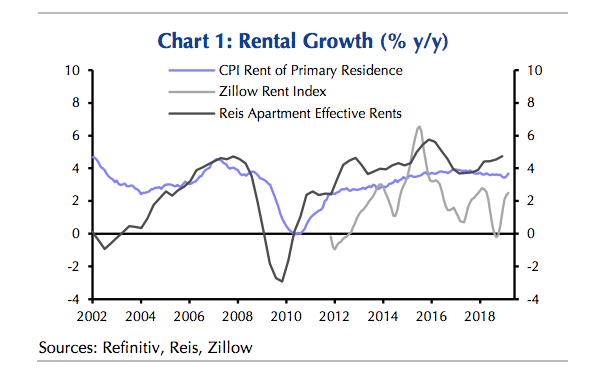 Additionally, the report said that the recent rent growth surge doesn’t reflect a tightening in the rental market in both the single-family and multifamily spaces.

“Despite the acceleration in rental growth, there is limited evidence that rental market conditions have got much tighter over the past few months. The latest Homeownership and Vacancies (HVS) survey from the Census Bureau reported that the overall rental vacancy rate edged up in the first quarter of 2019. With vacancy rates in both the SF and MF sectors ticking up.

The analysts noted that they are cautious about the HVS data from the Census Bureau because its recent data hasn’t been in line with other housing market measures.

“Admittedly, the rise in the latest quarter was from a 33-year low rental vacancy rate at the end of 2018. However, recent data from the HVS has not been consistent with other measures of housing market activity, and we would therefore treat that result with a fair degree of caution,” the analysts wrote.

The analysts said that alternative measures for growth aren’t pointing to tighter market conditions either.