In February, annual home price gains slowed across the country, according to the latest Case-Shiller Home Price Index from S&P Down Jones Indices and CoreLogic.

The report's results showed that February 2019 saw an annual increase of 4% for home prices nationwide, falling from the previous month's report. 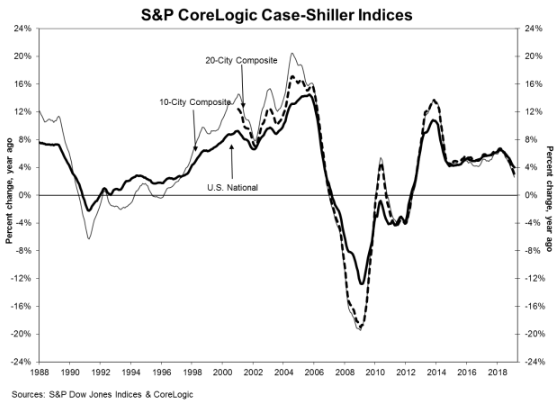 “Homes began their climb in 2012 and accelerated until late 2013 when annual increases reached double digits,” Blitzer said. “Subsequently, increases slowed until now when the National Index is up 4% in the last 12 months.”

And although sales of existing single-family homes have recovered since 2010 and reached their peak one year ago in February 2018, home sales have drifted down over the last year except for a one-month pop in February 2019, according to Blitzer.

“Sales of new homes, housing starts, and residential investment had similar weak trajectories over the last year,” Blitzer said. “Mortgage rates are down one-half to three-quarters of a percentage point since late 2018.”

According to the report, Las Vegas, Phoenix and Tampa reported the highest year-over-year gains among all of the 20 cities.

“The largest year-over-year price increase is 9.7% in Las Vegas; last year, the largest gain was 12.7% in Seattle. Regional patterns are shifting. The three California cities of Los Angeles, San Francisco and San Diego have the three slowest price increases over the last year. Chicago, New York and Cleveland saw only slightly larger prices increases than California,” Blitzer said. “Prices generally rose faster in inland cities than on either the coasts or the Great Lakes. Aside from Las Vegas, Phoenix, and Tampa, which saw the fastest gains, Atlanta, Denver, and Minneapolis all saw prices rise more than 4% — twice the rate of inflation.”