Median asking rent has reached an all-time high, rising to a record $1,006 in the first quarter of 2019, according to recent data from the U.S. Census Bureau.

Rental properties that were lying vacant remained low at 7% in Q1, a factor that is driving up rental prices. 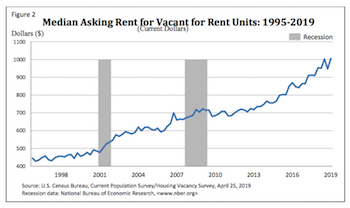 Meanwhile, homeownership levels across the country were relatively flat from last year, the data revealed, reversing a trend of eight consecutive quarters of growth.

It appears a surge in renters is the cause. The number of renters has changed course, rising in Q1 after falling in six out of seven previous quarters.

Skylar Olsen, Zillow’s director of Economic Research, said the data suggests the younger generation is having trouble overcoming the hurdles they face in the path toward homeownership, including securing a down payment, finding an affordable home and qualifying for a loan.

“These hurdles – combined with potential shifts in preferences and/or a simple delay in the many ‘adulting’ events like marriage and children that precipitate buying a home – can have the effect of keeping younger, would-be buyers in rental housing for a longer time,” Olsen said.

He added that the sheer size of the 20-and-30-something population is exacerbating the situation by creating competition that drives up rental prices.

“Multifamily permitting activity has been high in recent years, but the reality is that as much as it feels like we're building abundant rental units, it's not enough to make up for a decade-long shortfall experienced during the housing boom, bust and early recovery,” Olsen said.