Reverse mortgage volume has been on a rapid descent since program changes took hold in early 2018, and the trend doesn’t appear to be slowing.

The Department of Housing and Urban Development released its quarterly report to Congress Monday on the state of the Federal Housing Administration’s flagship Mutual Mortgage Insurance Fund, and it details the flailing state of the reverse mortgage program.

In the first quarter of 2019, reverse mortgage endorsements totaled just 7,388 loans – a 17.7% decrease from the previous quarter, which wasn’t that stellar to begin with.

But it’s worth noting that reverse mortgage volume suffered in the beginning of the year thanks to the government shutdown, which ground HECM endorsements to a halt.

It could be possible that these numbers are artificially deflated because of the shutdown – at least to some degree – and that second quarter volume will reflect a more accurate representation of the market.

Here is a chart from the report illustrating endorsement counts for both forward FHA loans and reverse mortgages by quarter since 2010: 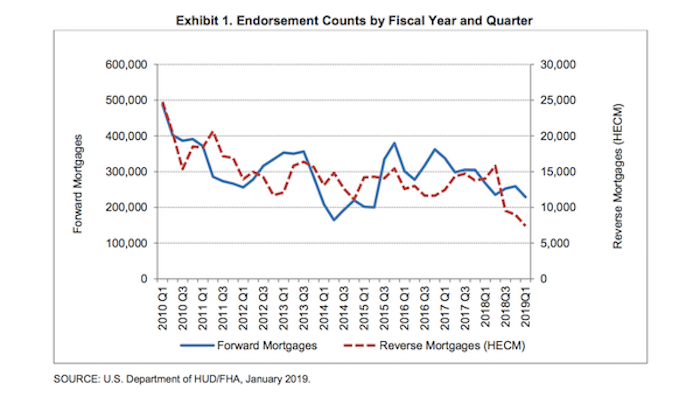 HUD also said that is has stopped reporting on HECM maximum claim amounts as of this quarter, instead counting actual paid claim amounts because it believes this figure better depicts actual claim costs.

This quarterly increase of 47.4% is in line with industry expectations, however, as it reflects loans that were originated during peak production years that are moving through a natural progression and being assigned to HUD upon reaching 98% of their maximum claim amount.

The report also details the expected net present value of the HECM program, revealing one shiny bright spot: It moved into negative credit subsidy territory in October-December of 2018, meaning that it is currently not a drain on the MMI Fund.