And while it’s no surprise housing markets across the country are cooling off, transitioning West Coast metros are challenging historical norms.

“Since January 2018, the U.S. housing market has cooled by 5.1 points to 8.7 on the index,” Zillow notes in a recent report. “The dip has been far more precipitous in some metros: In 6 of the 35 largest markets, conditions have swung from favoring sellers to favoring buyers, compared to historical norms.”

This is especially so for the bustling tech hub of San Jose, which now reigns as the nation’s fastest cooling major market.

In fact according to Zillow's buyer-seller index, which measures the balance between sellers and buyers in a given market on a 10-point index, San Jose has fallen a whopping 7.1 points and now sits at a solid 2.2 points.

This means the “downright cold” market now favors buyers over sellers, and its not alone.

According to Zillow's analysis, 10 of the fastest cooling metros are located in the west. This is on par with recent data from Redfin that indicates the West Coast is shifting towards a buyer's market.

“Buyers this year don’t have the same sense of urgency that was palpable a year ago,” Redfin Agent Daniel Brooks said in a statement. “Buyers are not worried about losing out on homes and more than willing to wait for a seller to drop her price. With front-row seats to a rapidly changing market, 2019’s buyer is savvy and is adapting quickly to the new normal.”

That being said, when compared to other metros, Zillow’s data indicates metros like San Jose are still white-hot. In fact, San Jose sits at 9.99 out of 10 on its cross-metro index.

So how can a market be both downright cold and white-hot? Well, that’s because San Jose, like other West Coast markets, is cooling much faster.

“As the San Jose example shows, markets can look a lot different compared to each other than compared to themselves over time,” Zillow notes. “New York is another example: While the New York metro area tops the list of best markets for buyers when compared to other metros, it’s heated up a touch in past year compared to its own history, climbing from 8.8 to 9.4 on that 10-point index.”

The image below highlights the 10 fastest cooling markets are located in the west: 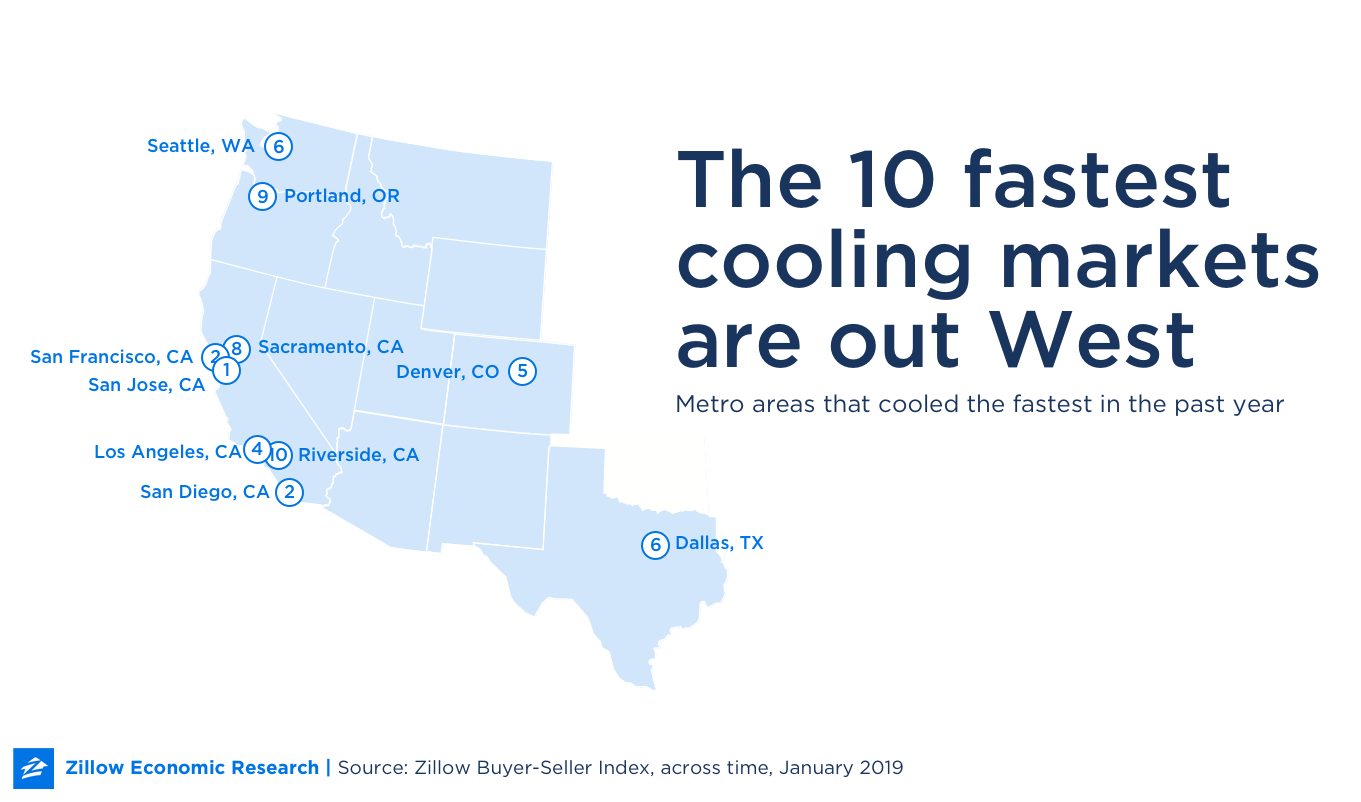