Although U.S. employment rates increased in nearly every sector in February, experts indicate an oncoming economic slowdown has dampened growth, according to the ADP and Moody's Analytics National Employment Report.

“We saw a modest slowdown in job growth this month,” ADP Research Institute Vice President and Co-Head Ahu Yildirmaz said. “Midsized companies have been the strongest performer for the past year. There was a sharp decline in small business growth as these firms continue to struggle with offering competitive wages and benefits.”

The National Employment Report indicates that private sector employment increased 183,000 jobs from January to February. Notably, the number of jobs added in January was revised up from 213,000 to 300,000. 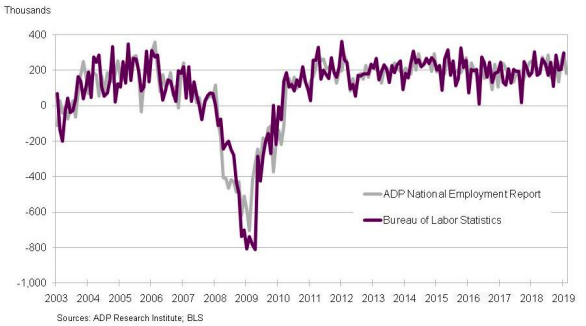 The report indicated that construction jobs rose from the prior month, and overall the goods-producing sector is predicted to increase by 44,000 jobs.

Below is a breakdown of job segments that saw changes in employment between January and February:

The service-providing sector is predicted to increase by 139,000 jobs, including:

Moody’s Analytics Chief Economist Mark Zandi said the economy has throttled back and so too has job growth.

“The job slowdown is clearest in the retail and travel industries, and at smaller companies,” Zandi continued. “Job gains are still strong, but they have likely seen their high watermark for this expansion.”