Saw a great video on LinkedIn today in which Noel Christopher, senior vice president at Renters Warehouse, warned people not to buy into the hype over the imminent real estate crash. Of course, it was tongue in cheek, and I haven’t heard anyone saying that the reporting slowdown in home appreciation was a sign of the end of times.

He was referring to the recent news from Black Knight that showed that home values fell 0.2% in November, making it the first time the market has seen a consecutive three-month decline in home sales since 2012.

To make it a little worse, new data from CoreLogic showed U.S. home prices increased only 0.1% in December, which showed that home price appreciation was at the slowest pace since 2012.

As you can imagine, some real estate investors were choking on their breakfast cereal. But not very many.

In fact, the stories I read were calm and balanced and there was no pulling of hair or gnashing of teeth. Black Knight’s director of public relations, Mitch Cohen, hit LinkedIn recently to comment: “Keep in mind that home values are still up year over year in every state and 99 of the 100 largest U.S. markets.”

Every time we see an in-depth analysis of a weekly change in interest rates or mortgage loan application data, we remind ourselves not to buy into the hype. What seems like a sheer drop this week may look quite different in light of next week’s data, to say nothing of an analysis of historical data. We all love analytics, but getting too close to the data prevents us from seeing the bigger picture.

And while “don’t buy into the hype” is good advice in general, it brings with it a bad side effect. It gives hype a bad name.

Hype is not bad. Buying into it without a valid reason is bad.

On a recent episode of the wildly entertaining and informative ZigZag podcast, hosts Manoush Zomorodi and Jen Poyant talk about the lifecycle of an idea. They use for illustration the Five Phases of the Hype Cycle that tech analyst Jackie Fenn created more than 25 years ago to track innovations.

This graphic illustrates the Hype Cycle Research Methodology currently in use at Gartner: 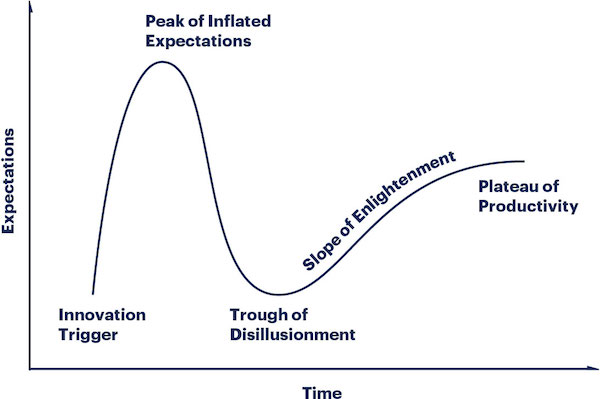 See the peak of inflated expectations there in the second stage of the cycle? That’s hype and it’s a good thing.

When an idea explodes into this part of the cycle, a lot of investment usually follows, which fuels more innovation and ultimately profitability. Well, for some of the good ideas at least. Because the following stages of the cycle are somewhat less rewarding, hype is typically blamed.

In truth, hype is the only reason anyone ever found out about the ideas that ultimately become wildly successful. It’s not intended to be a hot stock tip. It’s an invitation to peer into the idea and determine for ourselves whether it’s worth our time and investment. We don’t want to just blindly buy into it, but we may want to look into it.

Ask anyone who didn’t look into Amazon in 1997. The hype was out there, they just didn’t buy into it.

Cash-out refis are in high demand as equity levels skyrocket

The third quarter saw homeowners tap into their home equity at the highest rate in more than 14 years, with cash-out refis making up 54% of all refinances