In contrast to 2017's results, the survey indicates that the increased implementation of technology has boosted satisfaction. However, consumers still crave personal interaction throughout the mortgage origination process, which is especially true, as consumers prefer representatives to follow up after an initial inquiry.

Last year's results revealed that the power of technology had not been fully harnessed and consumers reported slower purchase processes. But this year's study shows overall satisfaction with mortgage originators increased as technology played a large role in streamlining the origination process.

Overall satisfaction climbed 10 points on a 1,000-point scale in 2018 due to the utilization of digital and mobile channels. Notably, 72% of consumers used a phone, 69% accessed a website and 58% utilized email.

“Technology alone is not a magic bullet in this market; the key is knowing where to leverage it and where to layer in more traditional forms of one-on-one support,” he added.

In fact, survey data reveals, that although the usage of digital channels increased, only 3% of consumers rely exclusively on digital self-service channels. Furthermore, satisfaction peaked when consumers spoke with lenders either in-person or on the phone as they applied for a mortgage.

Those who spoke with a lender on phone or in person came in with 871 points, followed by those who used a mix of personal and self-service tools at 868 points.

It’s worth noting the survey claims the speed at which representatives contact a consumer, is extremely indicative of their overall satisfaction. The survey shows that satisfaction levels decline sharply as consumers wait for contact from a lender.

The satisfaction of consumers that received contact from a lender within one day ways 869, falling to 852 after two to five days and finally hitting 806 after six or more days. The channels  with the fastest contact times were smartphone or tablet which took two days, followed by desktop which took 2.2 days.

It’s worth noting that Mr. Cooper had the greatest year-over-year increase among rank-eligible lenders, increasing 41 points from 2017.

J.D. Power explained that Navy Federal Credit Union and USAA were profiled but are not rank-eligible because they do not meet the study award criteria. 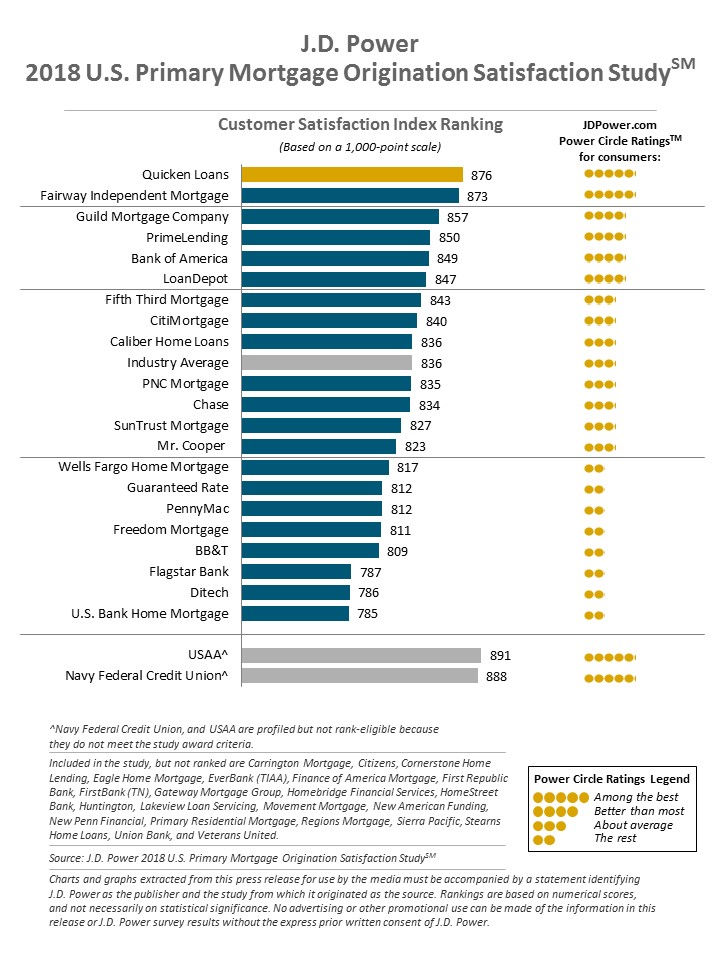 NOTE: The Primary Mortgage Origination Satisfaction Study is based on responses from 5,187 customers who originated a new mortgage or refinanced within the past 12 months.