As mortgage rates continue to climb in expensive coastal cities, more and more people are migrating to affordable markets, according the latest data collected from Redfin.

According to Redfin’s latest migration analysis, in the third quarter of 2018 people continued to relocate from costly coastal markets like San Francisco, New York, Los Angeles and Washington, D.C. Now, cities like Atlanta, Phoenix and Sacramento are enticing thousands of potential new buyers due to their affordability.

The migration report utilized data from Redfin’s website, gathering information from more than 1 million users who searched for homes across 80 metros, ranging from July through September.

The report revealed that across the country, 25% of home searchers looked to move to a new non-coastal metro in Q3, citing affordability as a driving factor.

“Rising mortgage rates are exacerbating affordability issues that have been driving people out of expensive coastal metros for the past few years,” Redfin Chief Economist Daryl Fairweather said. “With rates no longer near historic lows, buyers are increasingly cost-conscious, seeking more affordable homes in low-tax states in the South and middle of the country.”

San Francisco, New York, Los Angeles, Washington, D.C., and Denver, posted the highest net outflows in Q3. In these cities, the exodus of residents is larger than those looking to call them home.

(The graph below shows the net outflow of residents year over year.) 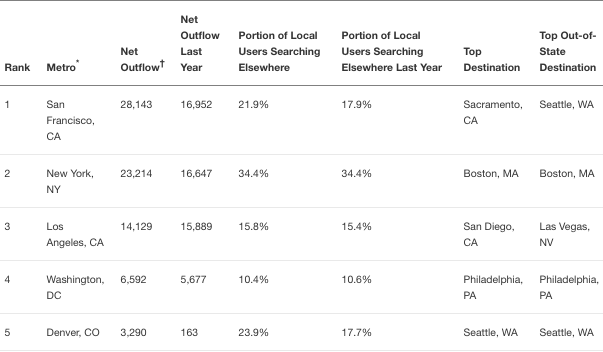 Throughout the past year, Sacramento, Atlanta, Phoenix, Portland and San Diego have attracted the biggest inflow of residents searching for “relatively” affordable homes and economies. In these cities, median home prices average around $150,000 below prices in metro areas with the largest net outflow, according to the report.

(The graph below shows the net inflow of residents year over year.) 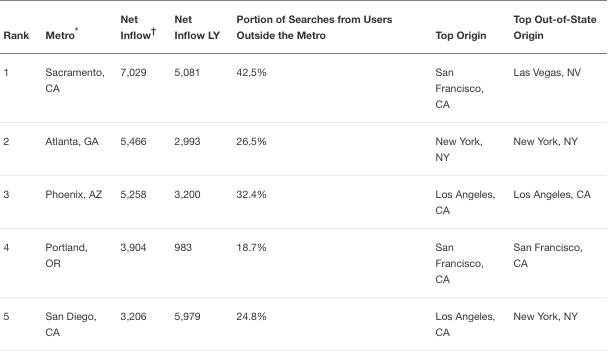 “We talk with a lot of people moving to Atlanta from areas experiencing more of a slowdown, and they seem to think Atlanta is too good to be true,” Redfin agent Ashley Ward said. “Benefits of Atlanta that keep drawing people here include top-notch public education, affordable housing, an appreciating market and more job opportunities.”

As interest rates and mortgage prices climb further, Redfin said it expects this trend to continue.