New York City’s luxury market has been clogged with too much inventory in recent months, slowing the sale of high-end properties, like this 15,000 square-foot duplex penthouse in Hell’s Kitchen.

The penthouse not only comes with 10 bedrooms and 11 bathrooms, but two tickets to space, a $1 million yacht, two Rolls-Royce Phantoms, one Lamborghini Aventador, courtside tickets to the Brooklyn Nets, a live-in butler, a private chef, a summer stay at a Hamptons mansion and a year’s worth of weekly dinners at a Michelin-star restaurant. 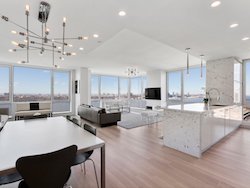 Located in the Atelier Condo building on West 42nd Street, which celebrities like Brendan Fraser and Jeremy Piven have called home, the penthouse has been on the market for five years. It was recently taken off and then put back on with the list of impressive perks.

Part of the problem is the price. Some say that’s a hefty number for a property in Hell’s Kitchen, but the owner, River 2 River Realty President Daniel Neiditch, has refused to lower it.

Another issue is that the residence is divided into 13 separate units that are currently inhabited by month-to-month renters. The sale includes a $2 million construction credit to build out the penthouse according to plans already drawn up.

Neiditch, a 39-year-old property developer who is also building manager of the Atelier and president of its condo board, said the extras are meant to provide the owner with immediate access to a lavish, high-flying lifestyle befitting of the owner of such a decadent residence.

But New York City’s lagging luxury market might have also provided an incentive to pile on the perks. 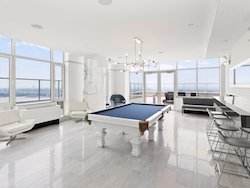 een a saturation of high-end properties under construction in recent years, according to an article in CNBC, and there’s been a distinct drop off in foreign buyers, with the share of properties purchased by outside buyers dropping 40%.

The inventory of luxury properties for sale in NYC increased 10% to its highest level for a second quarter in seven years, according to CNBC, meaning that high-end apartments are sitting on the market for six months longer than usual.

But maybe for the right buyer, those tickets to space on the Virgin Galactic will help seal the deal.