In a survey of over 500 real estate agents and 2.200 homeowners, HomeGain found that 47% of agents and 43% of homeowners expect to see home values decline over the next six months.

When comparing the results from the nationwide third quarter 2011 home values survey to the second quarter 2011 survey, the percentage of real estate agents who felt home values would decline in the coming months fell from 50% to 47%.  However, the number of homeowners who are predicting a decline jumped from 30% to 43%.

Only 11% of agents and 12% of homeowners see home values increased over the next six months. 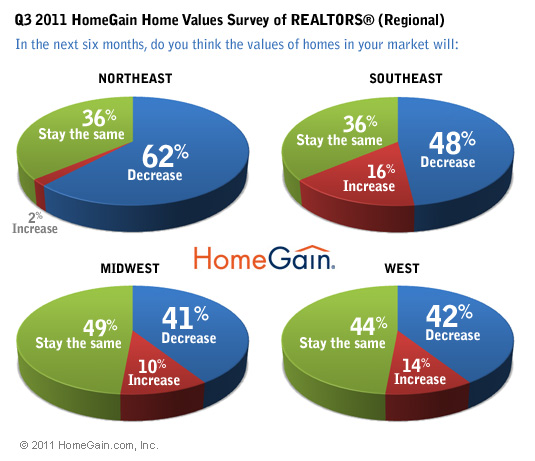 Providing a perspective on how homeowners view their own properties, 75% believe that their homes are worth more than the listing price recommended by real estate agents.  Conversely, 66% of home buyers reel that homes are over priced.

The survey was conducted between August 25 and September 4, 2011.