Two latest reports on the housing markets show some signs of positive growth, but highlight continued struggles in finding stability and growth momentum in home prices and sales.

NAR's Chief economist, Lawrence Yun noted that sales activity is underperforming and that tightened underwriting standards continue to weigh on healthy expansion.  Two other factors weighing on the market include appraisal valuations leading to canceled contracts and need for streamlining in the short sales process.

“Looking at pending home sales over a longer span, contract activity over the past three months is fairly comparable to the first three months of the year, and well above the low seen in April,” Yun said. “The underlying factors for improving sales are developing, such as rising rents, record high affordability conditions and investors buying real estate as a future inflation hedge. It is now a question of lending standards and consumers having the necessary confidence to enter the market.”

On a monthly basis, none of the MSA's tracked in the 20-city composite posted declines in June, with 19 showing increases and only Portland being flat. 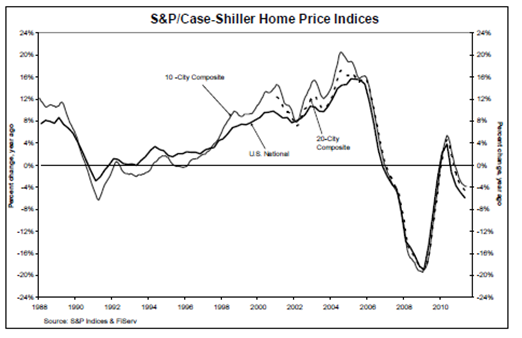 “This month’s report showed mixed signals for recovery in home prices. No cities made new lows in June 2011, and the majority of cities are seeing improved annual rates. The National Index was up 3.6% from the 2011 first quarter, but down 5.9% compared to a year-ago,” says David M. Blitzer, Chairman of the Index Committee at S&P Indices.