In their final Industry Trends report for 2010, Reverse Market Insight (RMI) highlights the growing command that the top ten lenders have taken in terms of market share.  After hovering in much of 2009 around 40%, market share of the top ten steadily increased in 2010 reaching a peak of 64.7% in December. 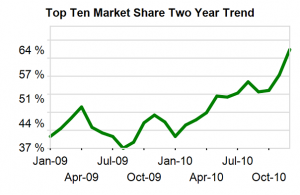 Several factors have contributed to this shift.  Obviously, consolidation is a major consideration, along with contraction.  As the number of active lenders have decreased 47.2% in 2010, volume has concentrated towards the top.  This is understandable as the theory would suggest that displaced originators who have stayed in the business would be likely to gravitate toward the perceived safe harbor of larger lenders.  With the significant drop off in volume as you move beyond the top ten, smaller lenders that have clearly struggled in the current market.

However, at the same time, there are a couple of dynamics that may shape this trend in 2011.  Obviously, Bank of America's plans to exit the space open a significant whole in the top ten.  At nearly 600 endorsements per month, not including wholesale, it is unlikely that any single lender will absorb the bulk of that production and the disbursement could help reverse the market share trend.  The question will be whether that disbursement is concentrated within the top ten, or spreads to a wider portion of the market.

Additionally, 2011 could be the year Financial Freedom drops out of the top ten.  In 2010, they fell from number 3 down to number 8.  They opened 2011 by dropping to number 15 in retail endorsements for January.

With a year that will likely see a broader range of change then the previous year as the governments' budget battle rages, along with the restructuring of their role in mortgage financing, and the continued focus on regulation, participants who remain in the reverse mortgage space will continue to seek out opportunity through the maze.  It may very well be the top ten that continue this trend of dominating market share.

However, uncertainty can bring surprises in competition and, as the dust settles, unexpected growth can lead to interesting dynamics.  Rising interest rates and changing secondary market conditions may fuel a shift in product utility and how well positioned participants are as the market shifts will define the trends in what will likely be another year where change is the constant.