Once a big player in mortgage lending, Goldman Sachs’ footprint in housing finance has gotten significantly smaller since the financial crisis…but that could be about to change.

In the aftermath of the crisis, the megabank’s mortgage presence was largely limited to lending to its own clients and buying up delinquent mortgages from Fannie Mae and Freddie Mac as part of its $5 billion settlement with the government over toxic mortgage bonds.

But in the last few years, Goldman Sachs began to inch its way back into housing finance on a few different fronts.

But it appears that Goldman Sachs has bigger plans and bigger goals for Marcus, specifically in the mortgage business.

Last week, Goldman Sachs President David Solomon (the rumored successor to CEO Lloyd Blankfein) told investors that the bank sees several areas of the finance space where it can grow Marcus over the next several years.

In fact, in an accompanying presentation made available on Goldman Sachs’ website, Goldman Sachs teased possible expansions into mortgages, credit cards, auto lending, life insurance, health insurance, checking, and payments, as show in the slide below (taken from Solomon’s presentation). 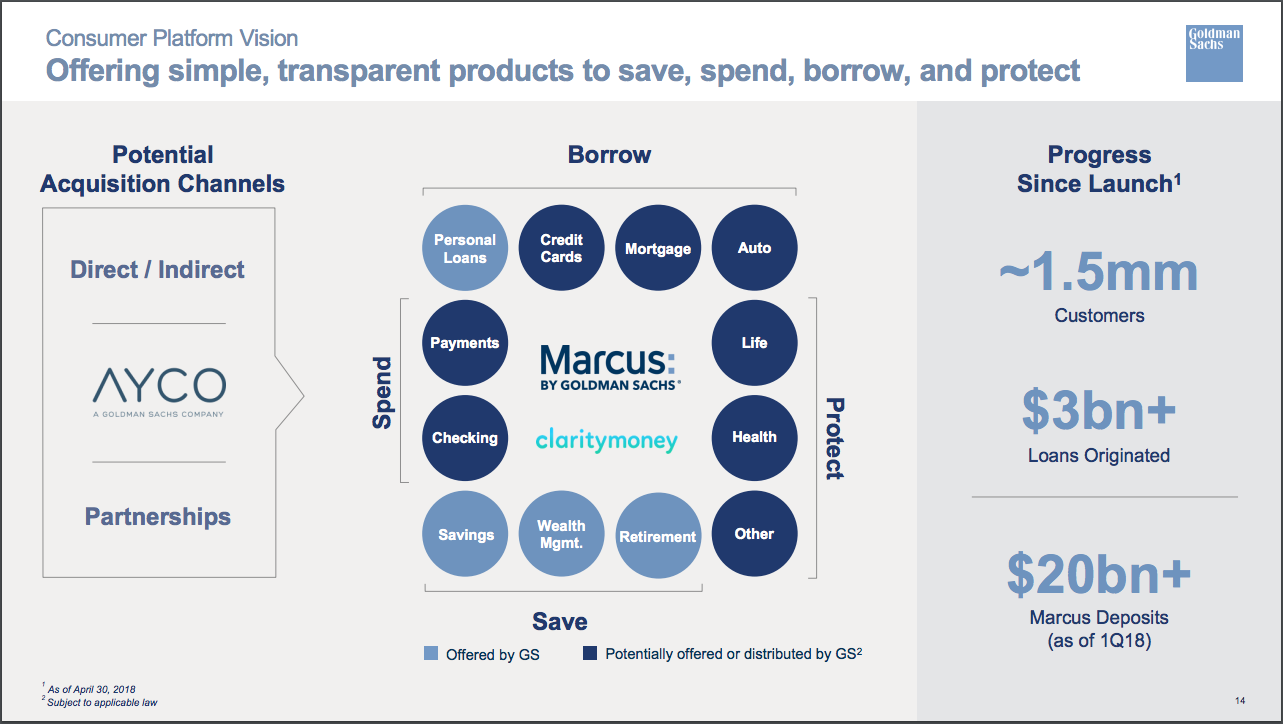 According to the presentation, since launching in 2016, Marcus has approximately 1.5 million customers and has originated more than $3 billion in loans.

Here’s a little more on the Solomon’s presentation, recapped by Bloomberg:

Goldman Sachs Group Inc.’s push into consumer finance has even bigger aims than investors might imagine.

“We don’t have to be one of the big leading consumer banks — we can have a narrow slice of share and have a very big, very profitable, very differentiated business over a period of time,” Solomon said. “We’re building it as a platform for Goldman Sachs over the next 50 years.”

And while Goldman Sachs may be planning a move back into mortgages, will the fact that both interest rates and home prices continue to rise keep people from being able to buy a house?

Newly released data from Black Knight shows that this year’s increases in interest rates and home prices are seriously stretching housing affordability, adding $150 onto the monthly payment for an median-price home nationwide in just the last six months.

According to Black Knight’s report, which was released Monday morning, the monthly payment on the median-priced home has increased by approximately 14% since the start of the year, thanks to rising interest rates and increasing home prices.

The latest interest data from Freddie Mac shows that interest rates relaxed slightly in the last week, but overall, rates are still rising at a consistency not seen since 1972, at least.

Combine that with constant increases in home prices and you have a recipe for decreased affordability. And the current trends are creating an “unsustainable” environment, according to Ben Graboske, executive vice president of Black Knight’s Data & Analytics division.

“Last month, we reported that January and February 2018 saw faster rates of monthly home price appreciation than the start of any year since 2005,” Graboske said.

“While the pace of annual home price growth slowed a bit in March, HPA is still around 6.5%. We’ve also seen interest rates climb by nearly three-quarters of a percent so far this year,” Graboske said.

“Together, those two factors have resulted in a $150 increase in the monthly payment on a 30-year mortgage used to purchase the median-priced U.S. home, about a 14% rise since the start of 2018. Stronger-than-average income growth in recent years still hasn’t been enough to keep up with rising HPA and interest rates,” Graboske added.

According to Black Knight’s report, while houses in much of the country are still more affordable than their long-term norms, there are 19 states that are either close to or beyond their long-term average affordability levels.

“Though much of the country remains more affordable than long-term norms, the current trajectory would change that sooner rather than later,” Graboske said. “We’ve modeled out multiple economic scenarios, some more conservative than others, and even with historically strong income growth, the current combination of home price and interest rate increases isn’t sustainable.”

In fact, if conditions don’t improve, we could be headed for a record low in affordability in just a few years.

“In recent years, incomes have been growing at a rate of 4.37% annually, as compared to a 2.75% 25-year average. Even so, a half percentage point increase in interest rates each year, combined with the current rate of HPA, would push affordability to an all-time low by 2023,” Graboske said. “However, many analysts expect HPA to slow, and March’s slight downward shift in annual HPA may already suggest some degree of reaction to tightening affordability.”

And finally, the mortgage and title insurance industry, which is already on alert for hackers attempting to steal mortgage funds during the real estate transaction, have a new problem to deal with: hackers pretending to the bank.

Two years ago, the Federal Trade Commission and the National Association of Realtors issued a warning to people interested in buying a home about scammers who were posing as real estate agents, Realtors and title insurance companies to steal consumers’ closing costs.

Last year, the American Land Title Association said that the previous warning from the FTC and NAR didn’t do enough to protect consumers and the group wanted the Consumer Financial Protection Bureau to issue a warning of its own.

Then, the FTC and NAR issued another warning, but that didn’t stop the scammers from stealing from unwitting buyers.

Now, ALTA is warning title insurance and settlement services providers that they may be targets of a new scheme.

Bill Burding NTP, executive vice president and general counsel for Orange Coast Title Co., reported that staff at his company received an email from one of their banks asking for verification of account information before funding a file. The email said the buyer’s lender required the information from the title company’s bank.

Employees noticed red flags such as different font sizes and bolded words. In addition, the bank reference letter asked for information that its bank would already have, such as the account number, full signors’ names and the legal entity that owns the account.

“It’s the keys to the castle if they are able to get this information,” Burding said.

As always, exercise extreme caution whenever anyone asks you for sensitive financial information, even if it appears to be your bank.

And with that, have a great week everyone!