National average rents grew by 2% year-over-year to $1,381 in May, the slowest start to a year since 2010, and an indicator that though still growing the multifamily market is slowing.

Much of this growth is concentrated in the top 20 cities by number of apartments, according to a report from RentCafé, an apartment news and analysis site, using Yardi Matrix data. RentCafé compiled this report from the Yardi Matrix rent data on 250 cities in the U.S. Yardi Matrix is a software platform that tracks industry data for equity, bankers, underwriters and a number of other users. What this data tells us is that what researchers have been predicting is coming true: the multifamily market is settling into a slow growth phase, and most of the multifamily market is consolidating around high opportunity job nodes 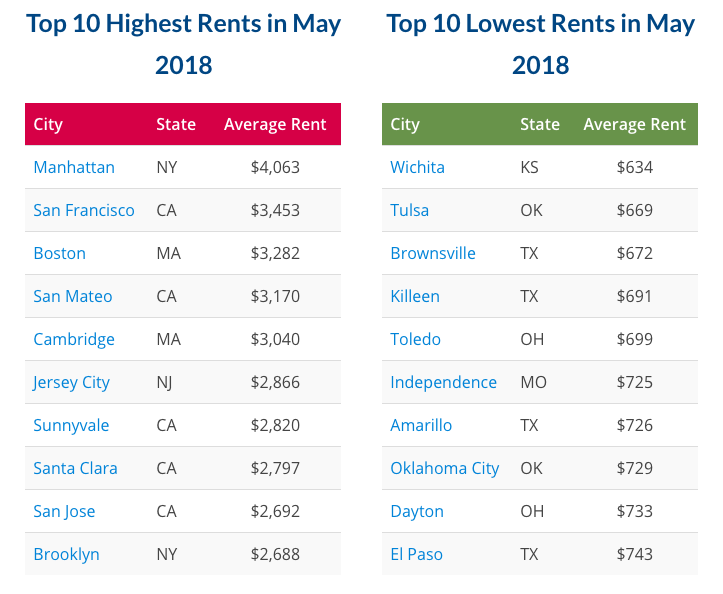 (Courtesy of RentCafé and Yardi Matrix)

Another trend RentCafé reports is rapid growth taking place in smaller cities as job growth and affordability bring them new residents. This is driving up their historically lower rents and bringing the affordability problems typically reserved for big cities with them. Cities like Midland and Odessa, Yonkers, Reno and Hollywood, FL saw the biggest gains in rent growth in May.

“One of the main reasons the fastest growing rents in the country are in small cities is due to population mobility. If the ‘value of work’ undergoes dramatic change and there is significant wage growth, the result will be an increase in mobility.” Yardi Matrix Director of Business Intelligence Doug Ressler said, according to the report.

“However, individual salary and wages have and continue to experience only modest increases. Housing demand due to population growth in the secondary and tertiary markets combined with lack of housing stocks shows greater gains than urban cores due in part to decreased mobility,” he added.

The seasonally adjusted Purchase Index rose 7.9% from the previous week, while the Refinance Index decreased 3.1% in the same period.