The #TimesUp and #MeToo movements have swept across the U.S. as more women begin to stand up and say no more.

Let’s back up. In case you aren’t up to date, the Time’s Up movement is where women are standing up for themselves and saying they will no longer accept sexual harassment or even gender bias, and the Me Too movement is women stepping up and sharing their stories, often for the first time.

Over the past few months, national news outlets have been filled with people in Hollywood, sports or even CEOs and other leaders across all industries stepping down after news of their alleged sexual harassment incidents were reported.

But so far, the mortgage and finance industry has not seen a major shake-up like what has occurred in other industries.

Are we somehow different from the rest of the population? Are we an industry with morally higher standards than everyone else?

If you’re a woman, you may have let out a little laugh at that thought. Because you know the truth. Of course not.

But the topic has been able to stand in the shadows, and no one really knows how common the behavior actually is.

mPower recently conducted a sexual harassment poll to further its understanding of the experiences of women within the mortgage banking community. The week before people left for Christmas break in 2017, the organization ran a poll for five days.

But there was a problem. The survey only received a 14% response rate.

“That’s really troubling, but again it was only a snapshot within the community,” the MBA said at its mPower Networking Lunch: Closing the Gender Divide at the Secondary conference.

So they didn’t stop there. The MBA went on to conduct three in-room polls at three different mPower events. The answers were confidential, but the overall data was displayed on the screen.

The results were the same all three times.

At one event, women were then asked to give just one word that described how the incident made them feel, and one word stood out above all the rest: powerless.

The word cloud below shows the most common themes women at the event expressed in response to the situations they had experienced within the workplace. 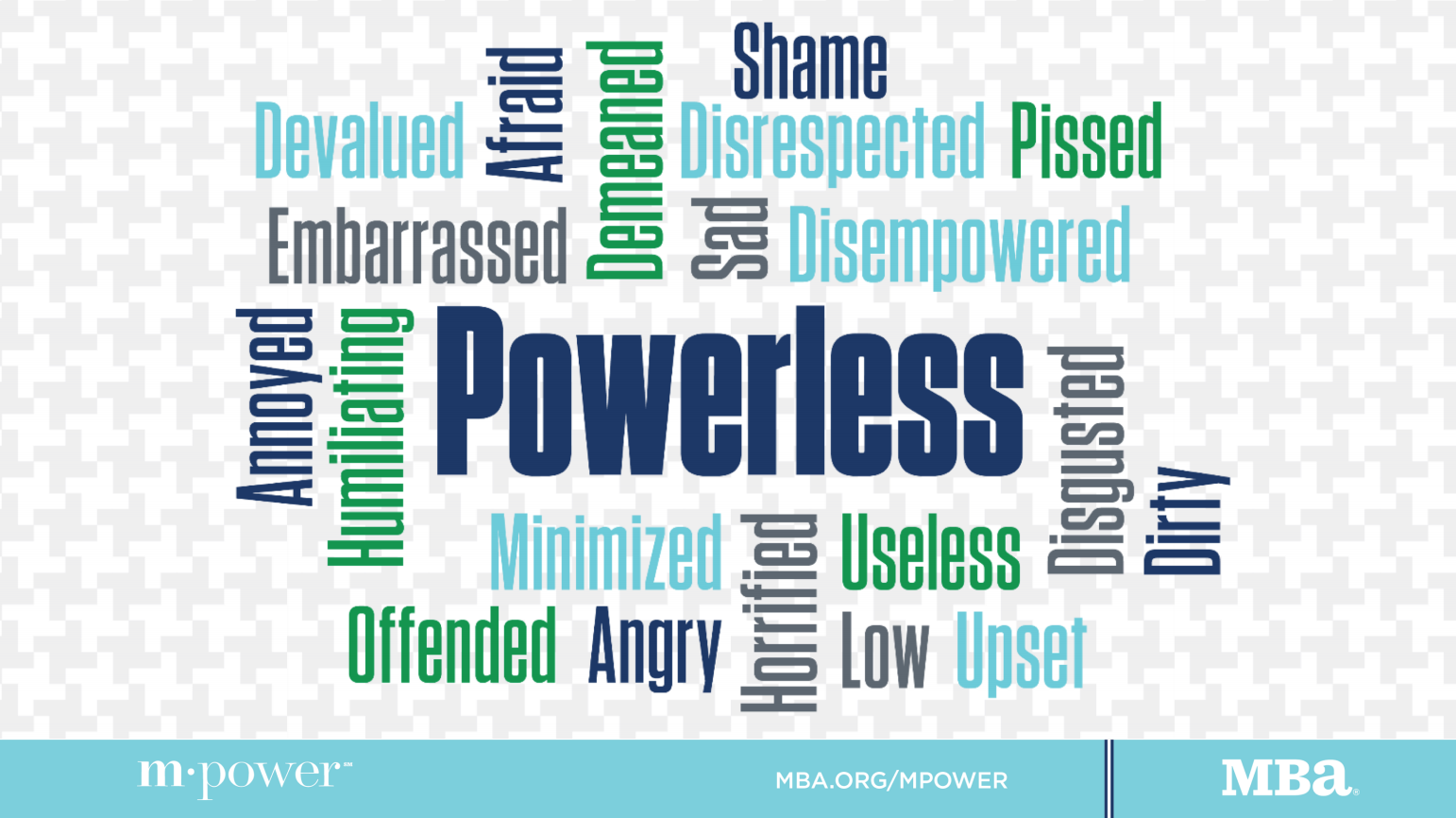 It’s time for a change, and mPower and other women in the finance industry are working to create that change.

We all know sexual harassment is wrong. But this issue must be brought to the table, and no longer be allowed to hide in the shadows.

But there’s another issue that is perhaps harder to perceive, to the point that sometimes even women themselves don’t recognize it, and that’s gender bias. But this, too, needs to change and is beginning to as more women work to educate and demand more from others in their industries.

Journalist Joanne Lipman, who began her career at The Wall Street Journal and has won three Pulitzer prizes throughout her career, pointed out that women need to stop simply talking to other women, and need to bring men into the conversation.

“Women talking to each other is a great conversation, but it’s also half a conversation,” Lipman said at the mPower event in New York.

And Ellie Mae, who sponsored the mPower event, expressed its hope that this won’t be an issue for future generations. “Together we can really make a difference and provide a different future for our children.”

Quicken Loans on Tuesday filed an S-1 with the U.S. Securities and Exchange Commission under the name Rocket Companies.