We spoke with Propertybase CEO Vance Loiselle about real estate tech and how the past year has accelerated the need for digital collaboration tools across the entire customer journey.

Homeowners are growing closer to estimating their home’s appraised value, according to the latest Home Price Perception Index from Quicken Loans.

This closing gap may be due to home prices increasing faster than homeowners can keep up with. Home values rose 1.84% nationally in March, according to the HPPI, and increased 7.64% year-over-year.

The chart below shows that since mid-2017, homeowners and appraisers have been growing closer in their home value perceptions. 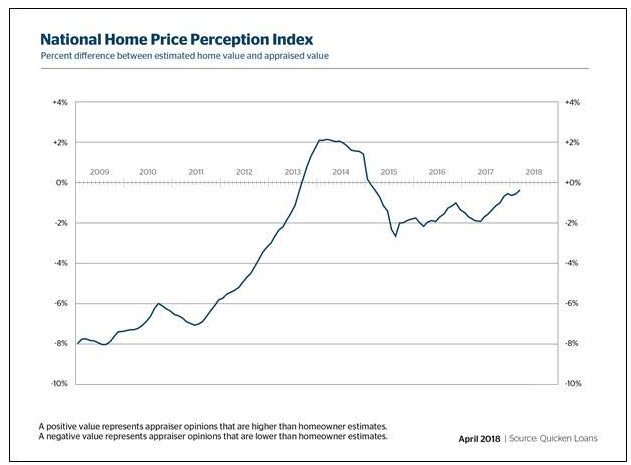 Owners estimate their home’s value at the beginning of the mortgage process, Quicken explained in its report. Then, later in the process, an appraiser provides their opinion of the home’s value.

“This month’s HPPI is great news for homeowners who may be thinking of selling their home, or using some of their equity,” said Bill Banfield, Quicken Loans executive vice president of capital markets. “Not only are owners’ and appraisers’ views of the housing market getting closer together when looking at the nation as a whole, but homeowners in many major areas are building equity at a rapid pace.”

And in many metros, homeowners were surprised to find their home value actually came in more than their estimate. In fact, 80% of metro areas reviewed in the HPPI showed appraisals at, or higher than, the owner’s estimate. 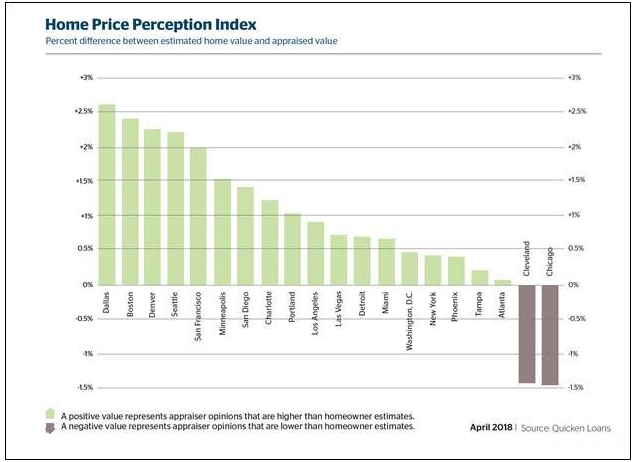 Home equity is continuing to climb, according to the HVI – the only measure of home value change based solely on appraisal data. Regionally, the increases ranged from an increase of 5.53% in the Northeast to a jump of 9.99% in the West.

“A monthly increase in home values, after a stable report last month, shows that demand for the few available homes for sale ramped up in March,” Banfield said. “The true test will be whether more homeowners decide to take advantage of these their higher home value and provide some much-needed inventory for buyers.”

Less than 5 million households did not make their rent or mortgage payments in March 2021, the lowest number since the onset of the pandemic.