The U.S. isn’t the only nation that’s seen an increase in renters and decrease in homeownership over a period of five years from 2010 to 2015.

In fact, one country even saw a switch from a homeowner dominated population to a renter population during that time period, according to a new study from Rent Café.

The interactive chart below shows that the U.S., along with some European nations, has seen a constant increase in renters over the five-year period.

The number of renters in the U.S. grew twice as fast as the European Union, and took fourth place in renter population growth over the five years with a growth of 9.3%. The U.S. was outpaced by Denmark, which saw its renter population grow 11.6%, Ireland with 12.3% growth and the United Kingdom with 21.6% growth.

Out of the 30 countries analyzed in the study, only one saw its renter population surpass its homeowner population to become the new majority. And no, that country is not the U.K., despite its large growth in rental population. Actually, the country where renters surpassed homeowners only saw an increase of 1.8% in renters from 2010 to 2015: Switzerland. 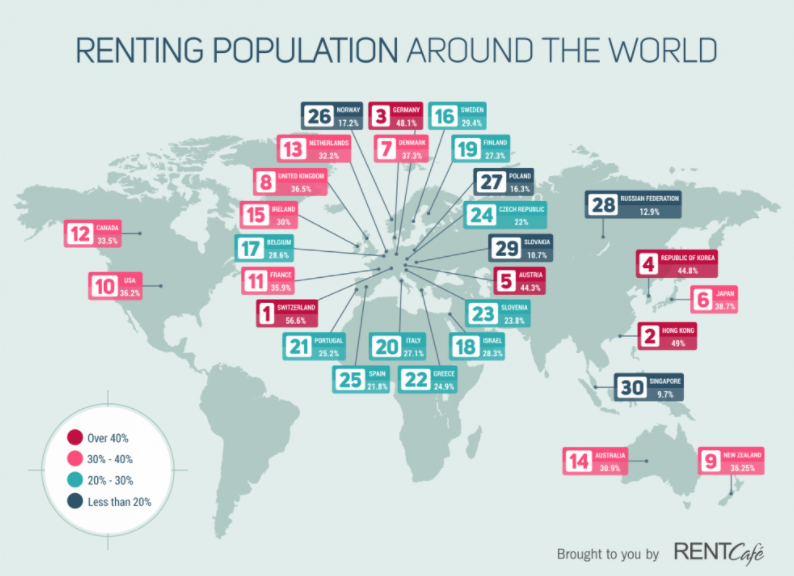 However, some nations saw a decrease in their renter population. Russia, for example, watched its share of renting households drop 28% from 2010 to 2015. Singapore also saw a significant decline in its renter population, which decreased by 13.4%.

The interactive chart below shows which nations saw increases in their renter population, which saw decreases, and how they compared to other nations in the study.

Interestingly, the data showed that typically, the more developed the country, the higher rental population the nation tended to have.

Freddie Mac names Musalem to board of directors

Alberto Musalem, CEO, investing officer and founder of Evince Asset Management LP, has been elected to the Freddie Mac board of directors.