The smell of grandma’s cooking slowly makes its way upstairs to where you’re finding your way out of your own bed. The smell isn’t surprising. Ever since your grandparents moved in a few weeks ago, they’ve been doing their share of pitching in with household duties.

And from overhearing the contractors’ conversation a few days before, you know your family is not alone in its new lifestyle – far from it.

Some areas are more saturated with multigenerational families than others. Metrostudy, a company which provides insight to the housing industry through its comprehensive database of housing market information, released a map showing the top markets for multigenerational housing.

Some of the top markets hold more than 6% of the U.S. multigenerational households, with the two top cities tying for 6.1%.

The reason for this growing trend? Experts have pointed out various possibilities including rising home prices, child care expenses, student debt, longer life expectancies and the growth of minority communities where it is more common for families to live together, according to realtor.com.

Data shows that Asians are the most likely to live in multigenerational households at 28%, followed by Hispanics at 25%, blacks at 25% and then whites with just 15%.

This shift toward multigenerational living makes sense when considering the coinciding shifts in U.S. demographics and even homeownership rates.

Harvard University’s Joint Center for Housing Studies indicates that immigrants have made up 40% of housing demand in the U.S. since 2010. And within a few decades, housing analysts expect immigrants and their progeny to be responsible for the majority of the net growth in households in this country.

What’s more, from 2000 to 2013, immigrants or the children of immigrants have accounted for 57% of the country’s population growth, according to a 2014 white paper from the Immigration Task Force of the Bipartisan Policy Center called “Immigration and Housing: Supply, Demand, and Characteristics.”

HousingWire’s April 2016 magazine feature “Why immigrants are crucial to the housing market” points out that Asians are the fastest growing group of immigrants.

And in another minority group where multigenerational living is popular, homeownership is on the rise.

And realtor.com pointed out that even if these demographics don’t have family living with them full time, they often need to accommodate for extended stays from family members, which could stretch out for months at a time.

Of course, the increase in the population of various ethnic groups living in the U.S. isn’t the only thing driving this rise in multigenerational living. Rising home prices are also contributing to the trend as Millennials looking to buy a home are met by limited inventory and outrageous prices.

Young adults today are both more likely to live at home and to live at home for longer periods than previous generations, according to Pew Research Center analysis of U.S. Census data. In 2016, 15% of 25 to 35-year-olds were living in their parents home, up five percentage points from Gen Xers who lived at home in 2000 and nearly double the share of the Silent Generation in 1964.

One expert pointed out that key aspects to living at home have changed since previous generations.

“The stigma around living at home is not what it was years ago,” Contract Simply CEO and Co-founder Will Mitchell told HousingWire, saying it gives many Millennials the chance to save money.

As this trend began to rise, the housing market took notice, creating homes that are made specifically for multigenerational households.

Mega homebuilder Lennar introduced its Next Gen home, calling it a home within a home  with two distinct living spaces under one roof.

“Imagine having both privacy and togetherness,” the company advertises on its website. “Both independence and help nearby when needed. Lennar is the first home builder to offer a home specifically designed for multigenerational living.”

The homes are single-family homes designed to house one family, but give each generation their own privacy. The homes have two garages, two front doors, two kitchens and even two master bedrooms. The homes could also have their own private living room. But although the homes are “separate,” they are together under one address, and have an internal door connecting the two spaces.

While the floor plan varies by size and location of the home, the sample floor plan on the next page shows what the multigenerational home could look like. The space highlighted in blue represents the add-on area that makes up the “second home.”

Lennar gave several examples of families who could utilize this type of home, including families moving an elderly parent into the home, or giving a special needs child their own space and independence.

The price range for these homes is on the high side. In the Dallas area, for example, a Next Gen home ranges from about $400,000 to around $600,000. In other, more expensive markets such as San Francisco, Next Gen homes start in the mid-$600,000 range and go up from there.

“Lennar’s Next Gen – The Home Within a Home opens the door to an array of financial and logistical benefits, while providing the opportunity to share the comfort of your home with loved ones,” Lennar says on its website.

This multigenerational trend does not look to die down anytime soon, and in fact, builders are expecting it to grow.

“It’s, as our best guess, not going to reverse itself,” said Jay Mason, PulteGroup vice president of market intelligence, in reference to the trend.

PulteGroup, a home construction company which also constructs multigenerational homes, recently surveyed two demographics: those with children aged 16 to 30 and those with living parents. Among respondents with grown children, 14% already have “boomerang kid” roommates, a young adult who moves back into their parent’s home after a period of independence, but a full 31% expect that at least one child will be returning to their home in the future.

On the other end of the scale, among the younger generation 15% of the survey respondents said they already have aging parents living with them, but more than twice that number, 32%, expect to eventually share their home with a parent.

Mason explained that as the PulteGroup constructs homes for multigenerational households, the homes are bought up at the same rate as other single-family homes, despite the more specific characteristics.

When determining where to construct the homes, Mason explained the builders look at suburban areas with good schools, and retail outlets which attract both Millennials and older generations and are attractive for raising a family.

Interestingly, PulteGroup’s research showed that while financial reasons are a common cause for the multigenerational trend, the company found that a high number of households had parents move back in as a deliberate choice to enhance familial relationships and build a better bond among the generations.

Whatever the reason, as both Baby Boomers and Millennials plan for their adult children or parents to move back in, builders are becoming increasingly conscious of the trend, and don’t expect it to let up any time soon.

These specially built multigenerational homes would have little impact on mortgage lenders as most would require funding specifically from the builder for the product.

Due to the high cost levels of the homes, and the specificity of the product, one expert explained it would likely not be funded by Fannie Mae, Freddie Mac, the Federal Housing Administration, or any other QM lender.

“I don’t know that it will be much of a trend for the mortgage banker, because the builders won’t get financing in the consumer’s name,” said Eli Peltzer, Land Gorilla executive assistant of the risk management department.

Peltzer also explained these homes would be limited to key areas where the builder had special zoning to be able to construct multigenerational homes. The home would fall under a single-family home with an accessory dwelling unit.

When builders apply for zoning for new homes, the process could take years to complete. Even in order to add an accessory dwelling to an existing home would take months to get zoning permission, Mitchell said. But this is a necessary evil as zoning is key to being able to construct the added unit.

In some areas, even adding an extra bar sink and fridge can violate zoning laws, Mitchell explained. In many cities, homes must reach a certain square footage to be able to add a second kitchen.

And this requirement leads to one of the key reasons why these homes are sold on the more expensive end of the market. Because they are larger homes, and must remain large in order to keep the extra kitchen, these homes will not appear in more affordable forms.

What’s more, as several generations come together to live in the same unit, a smaller home with less space to spread out is typically not what these families are searching for, meaning builders are not likely to make multigenerational homes smaller or more affordable.

But there are ways homebuyers can better afford these homes as they look to qualify for the mortgage. For example, borrowers who are renting out the accessory dwelling could add this income to the loan, allowing them to qualify for a higher loan amount, Mitchell pointed out.

Also, because these homes house several generations under one roof, they typically have more income owners per household, meaning they can afford and qualify for a larger mortgage payment. In fact, these homes would be more affordable for each party involved than if they each bought their own, separate home.

But some experts remain skeptical, and predict that despite the rising share of multigenerational households, this type of home will remain a niche product.

“My assessment is it will stay relatively niche,” Mitchell said, saying most cases of multigenerational households, such as bringing in an older family member or even a Millennial as they look to save for a home themselves, is a short-term situation.

He pointed out much of the multigenerational situations are not tied to long-term life decisions, but rather, short-term life circumstances and cash flow.

Mitchell also pointed out that reselling the home later on could become a problem as fewer people are likely to buy this niche product.

Of course, Mitchell pointed out that if immigration increases, these circumstances could change.

And while some experts may still be wary of jumping on the trend, more and more builders are beginning to construct multigen homes, and homebuyers are buying them. 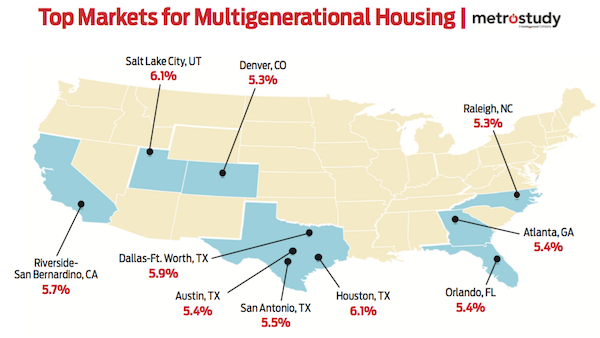 However, there is opportunity within this market to create products that would serve households in both temporary and long-term multigenerational housing units.

In several different reports, the Urban Institute continues to draw attention to the current credit box, saying it is way too tight, and there is plenty of room to expand safe access to credit.

As this trend grows, lenders have to opportunity to expand their credit box and create products catered toward multigenerational living, and toward minority groups that are more likely to live together, and also typically have lower access to credit.

Lenders creating a product to enable homebuyers more options when purchasing homes as a family could also open up the door for more builders to begin experimenting with the product.

While larger builders such as Lennar are able to fund their own homes through its lending channel, this would open the door for smaller builders which have less access to funds.

Of course, other larger builders will also have more opportunities to sell this product as the number of adults living with their family members continues to rise.

Multigenerational living may not be ideal for everyone. It may not even be ideal for almost everyone. But as home prices continue to rise, and our nation sees an influx in immigrants from cultures where families are more inclined to live together, this trend could have real staying power.