Real estate investment firm Amherst Capital Management released market commentary on Wednesday outlining the potential impact Amazon’s second headquarters could have on the already hot housing markets of the 20 cities being eyed by the ecommerce giant.

Last week, Amazon announced its shortlist of potential locations for its second headquarters, known as Amazon HQ2. Amazon said it expects to create as many as 50,000 “high-paying jobs” and invest more than $5 billion into its new headquarters.

The firm’s highlights point out that Pittsburgh has the potential to see the largest increase in demand, at 27%. Fast-growing markets, including Columbus and Raleigh, will see an acceleration in an already-high-growth metro area.

“The implications for each of these markets are tremendous. The Pittsburgh metro area has more than 2.3 million people, but census data shows that its population has seen a net decline for four consecutive years,” Amherst Capital said in its analysis. “If Amazon places HQ2 in the Pittsburgh metro, the move has potential to cause a 27% increase in demand for homes for sale. This decision, along with ancillary moves of competitors, vendors, and other related companies could change the fortune of the metro area.”

The potential locations of New York, Chicago and Los Angeles will see only incremental gains in demand.

Amherst Capital's update explained that while the specific effects vary depending on the area in which HQ2 locates, the potential addition of 50,000 jobs will “impact government revenue via personal income and corporate taxes, and lead to increased demand on roads and school systems, and increased demand for housing. For example, if HQ2 locates in New York or Los Angeles, the relative effect on the local area will be smaller than if HQ2 ends up in Raleigh, NC, or Austin, TX.”

According to the data, the New York, Dallas, and Chicago markets are expected to receive the smallest gain in demand relative to their housing market size for single unit dwellings for sale from HQ2. Amherst Capital said the addition of HQ2 to these very large metro areas would “incrementally strengthen the regional economy, but is unlikely to change the fortune of the area.”

The firm used a combination of economic, demographic, and local residential real estate metrics, to calculate the approximate expected annual increase in demand for single unit homes for sale. And its projections assume Amazon evenly divides hiring the projected 50,000 employees across five years. The chart below shows one-fifth of the expected increase in housing demand from HQ2 relative to 2016 full-year sales for each area, according to Amherst Capital. 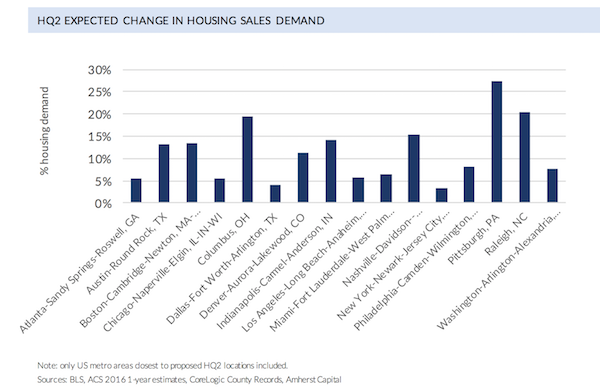 The firm concludes that wherever HQ2 is built, the metro area selected will see an increase in housing demand.

“Amazon’s decision to locate HQ2 in one of several areas has the potential for a wide range of outcomes. For areas like New York and Dallas, HQ2 would be another large company located in the metro area bringing incremental strength to the regional economy. For Pittsburgh, HQ2 may be able to change the fortune of the metro area and reverse its population decline. For fast growing areas like Columbus and Raleigh, HQ2 would simply accelerate the growth of an already-high-growth metro area. Whether small or large, the area in which HQ2 eventually locates will be set for a housing market bump.”