The most recent data from Freddie Mac showed that mortgage rates have been trending up over the last few weeks, nearly surpassing 4% in the last week of the year.

In fact, the most recent Freddie Mac report showed that interest rates rose to five-month high during the week ending Dec. 29, 2017.

A new trailing index report from the Federal Housing Finance Agency backs up the Freddie Mac data and shows that interest rates are indeed on the rise as 2017 ends.

The FHFA report, released this week, shows that interest rates on conventional purchase mortgages increased from October to November.

According to the report, the “National Average Contract Mortgage Rate for the Purchase of Previously Occupied Homes by Combined Lenders Index” checked in at 4.05% for loans closed in late November, up 7 basis points from 3.98% in October.

The FHFA report also showed that the average interest rate on all mortgage loans rose above 4% in November, climbing to 4.03%, up 6 basis points from 3.97% in October.

Additionally, the report showed that the average interest rate on conventional, 30-year, fixed-rate mortgages of $424,100 or less was 4.17% in November, up 6 basis points from 4.11% in October. 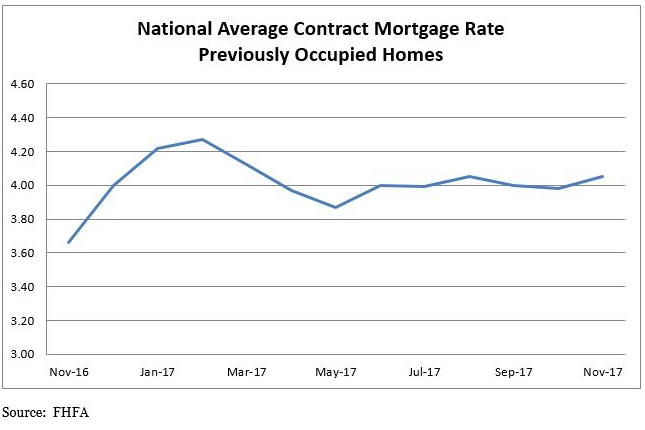