Job creation will dwindle in August due to the impacts of hurricanes Harvey and Irma, according to the ADP and Moody's Analytics National Employment Report.

The report predicts an increase of just 135,000 jobs in September. This is down significantly from last month’s predicted increase of 237,000 jobs, and even up from the disappointing U.S. Bureau of Labor Statistics’ employment increase of 156,000 in August.

“In September, small businesses experienced a dip in hiring,” said Ahu Yildirmaz, ADP Research Institute vice president and cohead. “This is in part due to Hurricane’s Harvey and Irma which significantly impacted smaller retailers. In addition, the continued slow down we have seen in small business hiring could be due to a lack of competitive compensation to attract skilled talent.”

But whether or not the BLS numbers will follow the report is yet to be seen. As the numbers above show, ADP didn’t exactly hit the mark for the job increase in August.

The chart below shows that while ADP may not always hit the nail on the head, it serves as a general measure for the trend of the jobs market. 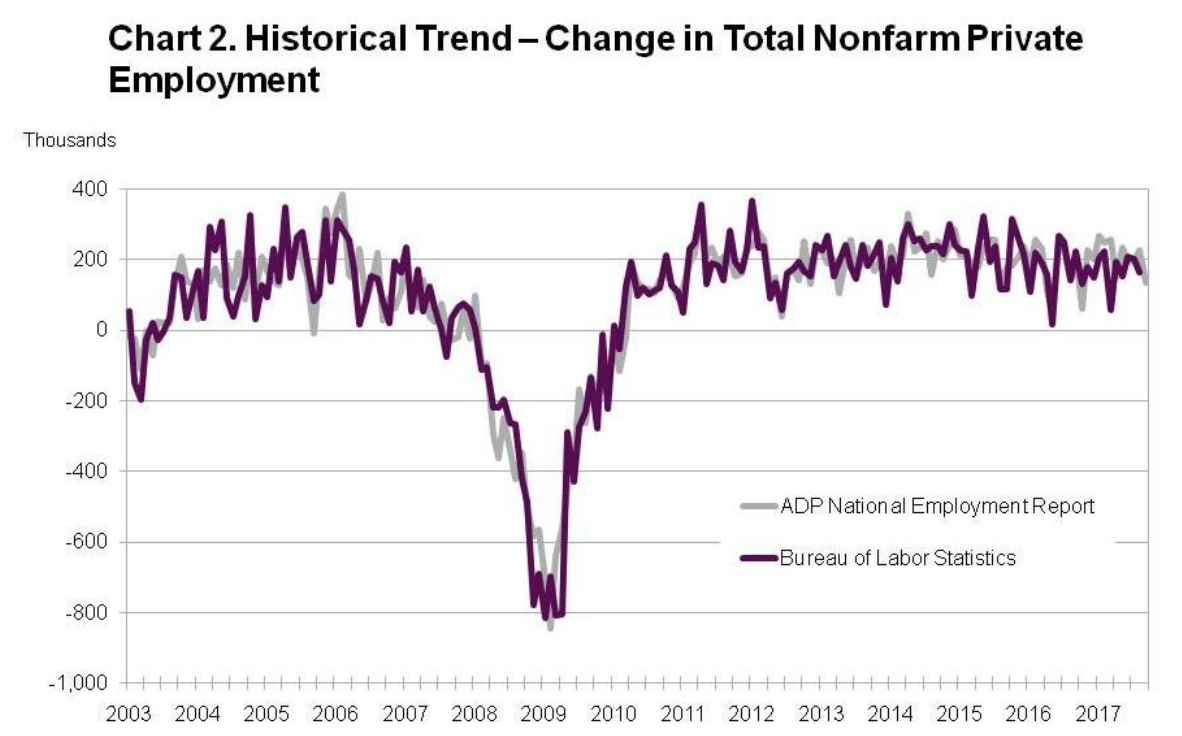 Or does it? As it turns out, ADP discloses at the very bottom of its report the revisions for the previous month. And these revisions are by a fairly significant amount. Here are the last few months of revisions:

With numbers that change so drastically, can ADP’s report be a true indicator of the job growth we should expect to see in any given month?

Once again, construction is expected to see a boom in employment in September. The goods-producing sector is set to increase by 48,000 jobs overall, with changes in the following areas:

The service-providing sector is set to increase by only 88,000 jobs, with changes in these areas:

But one expert fears the job report could come in much lower than even the predicted 135,000.

“The ADP payroll survey revealed a modest 135,000 increase in private employment in September, which was above the consensus forecast at 125,000,” Capital Economics Chief Economist Paul Ashworth said. “But despite coming in better than the markets expected, that leaves us a little concerned because the ADP’s methodology means that the hurricanes shouldn’t have had much of an impact.”

Ashworth explained that ADP’s survey counts all employees on a business’s payroll, whereas the BLS numbers only look at who was paid.

“The upshot is that Hurricanes Harvey, which hit in late August, and Irma, which hit during the NFP survey week, should have had a relatively smaller impact on the ADP,” he said. “If the ADP measure was up only 135,000, then there could be downside risks to our estimate that non-farm payrolls increased by 100,000.”