As readers of HousingWire are likely well aware, over the last few years, there’s been a shift in the mortgage business, with nonbanks significantly increasing their share of mortgage originations as the big banks dialed back in the wake of the financial crisis.

This shift was noted in a recent report from the Urban Institute, which showed that the nonbank origination share rose from 30% in 2013 to 60% in July 2017.

Over that same time period, Ginnie Mae experienced the largest shift, with its share of nonbank originations rising from 37% in 2013 to 75% this year. In 2011, nonbanks made up only 11% of Ginnie Mae’s originations. Ginnie Mae is the arm of the federal government that securitizes federally insured mortgages.

And, according to a new report from a government watchdog, Ginnie Mae was not prepared for the rise of nonbank mortgage lending and “did not adequately respond” to the changes in its lender base.

The report, published late last week by the Department of Housing and Urban Development Office of the Inspector General, states that over the last few years, Ginnie Mae “did not implement policies and procedures in a timely manner for its account executives to follow in managing issuers, did not develop a written default strategy, and did not assess and address the risks posed by nonbanks in a timely manner.”

The report notes that since the financial crisis, both the size and scope of Ginnie Mae’s business changed considerably.

As the chart below shows, the remaining principal balance of Ginnie Mae mortgage-backed securities has increased from $427.6 billion in 2007 to $1.7 trillion in 2016, an increase of 300%. 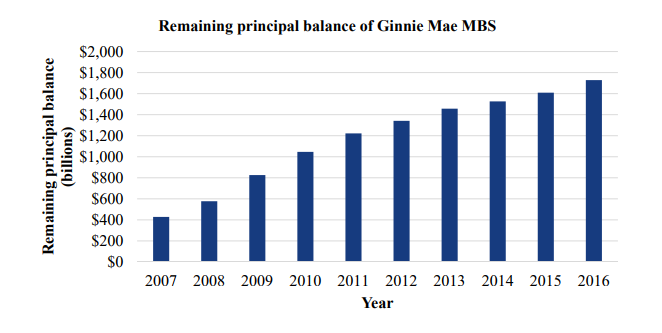 While Ginnie Mae’s portfolio has tripled, the makeup of its business changed as well.

As the chart below shows, Ginnie Mae’s issuer base shifted dramatically over the last several years towards nonbanks.

In fact, Ginnie Mae never had nonbank issuers of this size, nor have nonbanks ever made up such a large portion of its issuer base.

The HUD-OIG report states that Ginnie Mae was not prepared for this shift and was forced to be reactive, rather than proactive, towards the shift in its business.

“This condition occurred because Ginnie Mae was not prepared for the rapid growth and shift in issuer base and its staff lacked the skills necessary to immediately respond to increased risks posed by these changes,” the HUD-OIG report states.

“As a result, Ginnie Mae may not identify problems with issuers in time to prevent default,” the report continues. “Additionally, it may not be able to properly service loans absorbed in a default and may require additional funds from the United States Treasury to pay investors in the event of a large issuer default.”

The OIG report states that in 2011, Ginnie Mae began reviewing its internal procedures but did not enact official changes until July of this year.

The report also states that Ginnie Mae did not address the potential for defaults concentrated among several large originators that may rely on credit lines for funding, as opposed to depositories, which would theoretically have capital on hand to cover defaults if needed.

Ginnie Mae did not develop a written default strategy, which included identifying, analyzing, and planning for all default scenarios and determining whether its staff and master subservicers had the capacity to default and absorb large issuers (issuer with more than 100,000 loans). Ginnie Mae operates with a small staff and relies heavily on contractors to perform its core responsibilities, including servicing loans absorbed from defaulted issuers. Ginnie Mae officials told us that they recognized the challenges Ginnie Mae faced and had ideas on how they would execute large or multiple-issuer defaults, but Ginnie Mae did not begin to implement a written strategy to address large issuers or all default scenarios until July 2017.

The OIG report lays out a series of recommendations for Ginnie Mae to enact to ensure the agency is properly overseeing nonbank originators, including:

It should be noted that Ginnie Mae’s Michael Drayne, senior vice president in the office of issuer and portfolio management, provided a response to the OIG’s report, as part of the published report itself.

In Drayne’s response, he states that Ginnie Mae responded appropriately and within its means to the changes in its business.

“The report asserts repeatedly that Ginnie Mae’s overall organizational response to the changing environment was not sufficiently timely, but nowhere is it explained how Ginnie Mae could reasonably have been expected to make substantial organizational changes more rapidly than it has been able to do, given the need to develop skills and procedures during the time merely to cope with day-to-day program management needs that did not previously exist,” Drayne writes in response.

“Our view, in fact, is that Ginnie Mae and OIPM staff in particular have displayed an unusual degree of vision, persistence and skill in re-organizing in the face of extraordinary change over a five-year period, without the occurrence of any significant lapses in the management of the MBS program,” Drayne adds.

To read the OIG report in full, click here.

Finicity, an open-banking solutions provider that was acquired by Mastercard in October, announced that it is dipping further into the mortgage space.