Anthony Hsieh is the founder and CEO of one of the most prominent nonbanks in the industry, loanDepot.

He sits at a small table of CEOs who are helping bring the mortgage industry into the digital age.

The thing is, for a CEO of a company that has funded more than $100 billion in loans since its inception, he regularly opens up a seat at the table for others to listen in on what it’s like to be at the helm of one of the biggest mortgage companies.

Anyone who follows Hsieh on LinkedIn is privy to this.

He regularly shares pretty candid thoughts in his posts, giving a sense of transparency that most people are probably not used to from a CEO.

Some of his posts include complimentary remarks toward various loanDepot employees, while others include frank thoughts on the competition in the industry and loanDepot’s success.

Not everyone is a fan of his direct thoughts though, with his posts commonly receiving hundreds of likes and a solid handful of comments debating, affirming or rejecting his post.

His latest post on LinkedIn was enough to drum up nearly 400 likes and 44 comments at the time of writing this. I am sure these numbers will grow too.

This particular post caught my eye since he uses the platform to shut down any industry rumors about loanDepot, and of course, he executes this with a hint of sarcasm.

For a company that is one of the top dogs in the space, it’s interesting to get Hsieh's firsthand thoughts on what others are saying. For example, I bet a lot of people in the industry have speculated on when, and if, loanDepot will ever file for IPO.

The No. 1 item on his list should give you good chuckle. 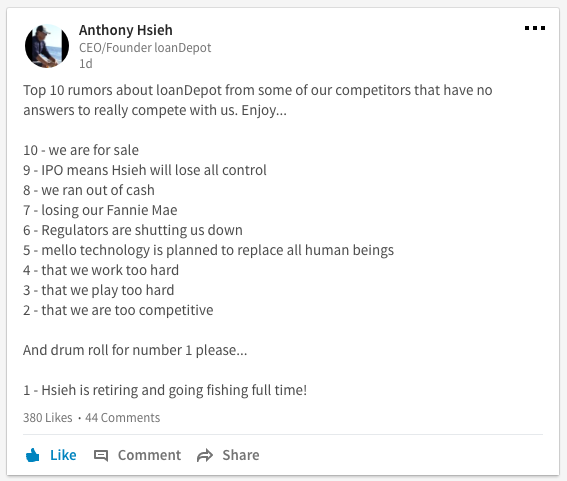