As California moves into the second half the year, home sales are projected to cool down, according to the latest report from the California Association of Realtors.

The forecast comes after a year already plagued with low housing inventory and rising home prices.

“As we enter the second half of the year, we are likely to see some slowdown in sales that extends beyond the typical seasonality change,” said CAR President Geoff McIntosh.

“While the rate of closed sales indicates that California’s housing market has continued to move forward, tight supply continued to push up prices and lower affordability, which can ultimately undermine the housing market by putting homeownership out of reach for too many households,” said McIntosh.

Looking solely at the data for July, California’s housing market stayed solid, with gains year-over-year in both sales and price.

Closed escrow sales of existing, single-family detached homes in California remained above the 400,000 benchmark for the 16th consecutive month and totaled a seasonally adjusted annualized rate of 421,460 units in July.

CAR noted that the statewide sales figure represents what would be the total number of homes sold during 2017 if sales maintained the July pace throughout the year.

The report added that year-to-date sales are running 2.9% ahead of last year’s pace, but are beginning to slow.

Earlier this month, CAR reported that only 29% of California households could afford to purchase the $553,260 median-priced home in the second quarter of 2017.

And according to this latest report, the median-priced home is only going up, coming in at $549,460 in July.

While it declined to its lowest point since April 2017, the statewide median price remained above the $500,000 mark for the fifth straight month and remained close to the most-recent peak.

“Despite a dip from the recent record high in June, the statewide median price continued to rise at a high single-digit rate in July, and was growing at the second fastest pace in 2017,” said CAR Senior Vice President and Chief Economist Leslie Appleton-Young.

“Tight inventory remained the fuel to upward momentum in home prices, particularly in the Bay Area and other high-priced markets,” said Appleton-Young. “With supply expected to be tight for the rest of the year, home prices should grow moderately in the next few months.”

The chart below shows the median price of existing-single family homes in California, with the peak in May 2007. 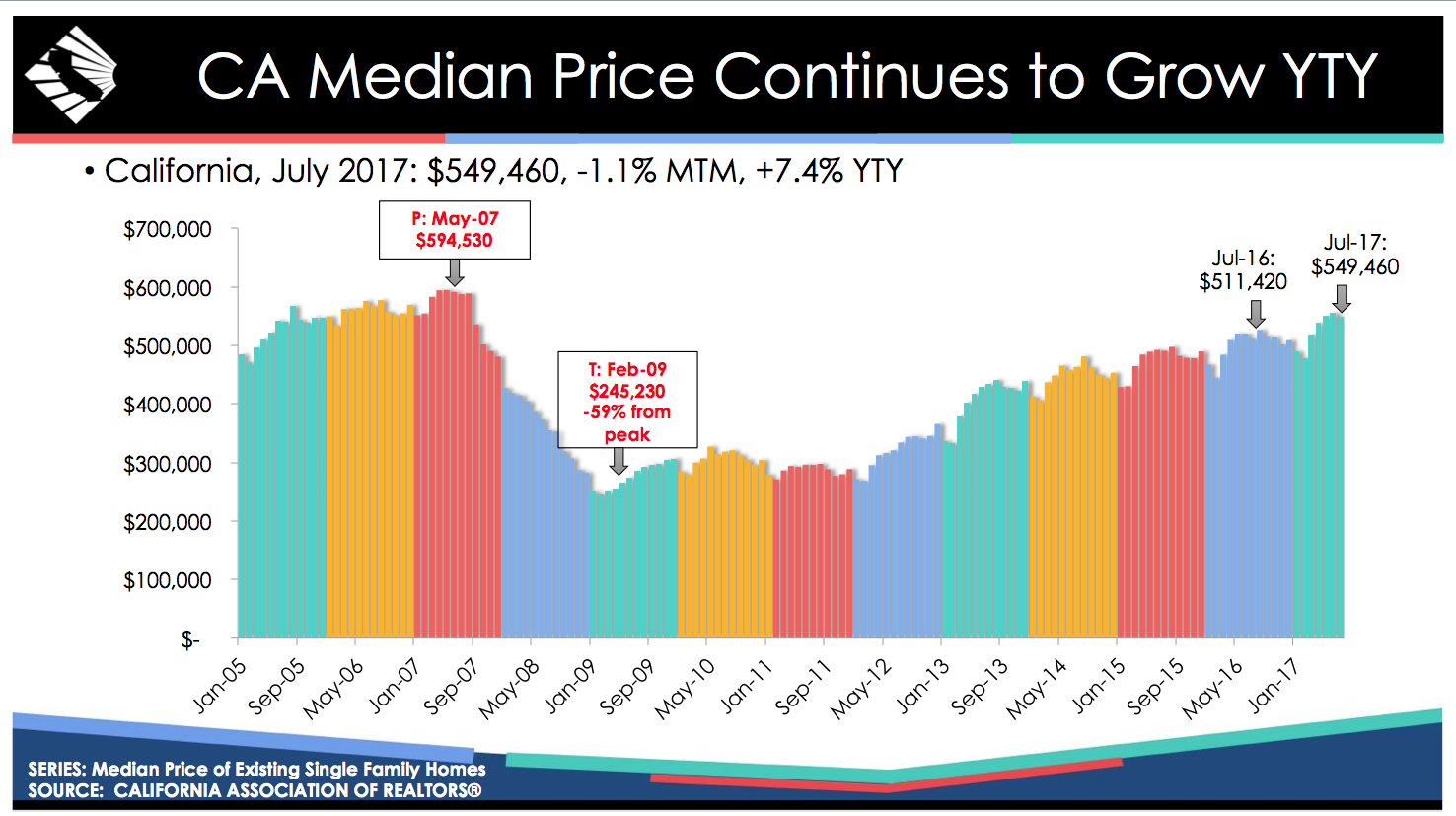