New York City made it official – low-income tenants will now have a right to legal representation when facing eviction, effective immediately.

Friday, NYC Mayor Bill de Blasio signed a bill into law [pictured below], becoming the first city in the U.S. to state that low-income families, those whose households make less than $50,000 per year, have access to lawyers when they receive an eviction notice. 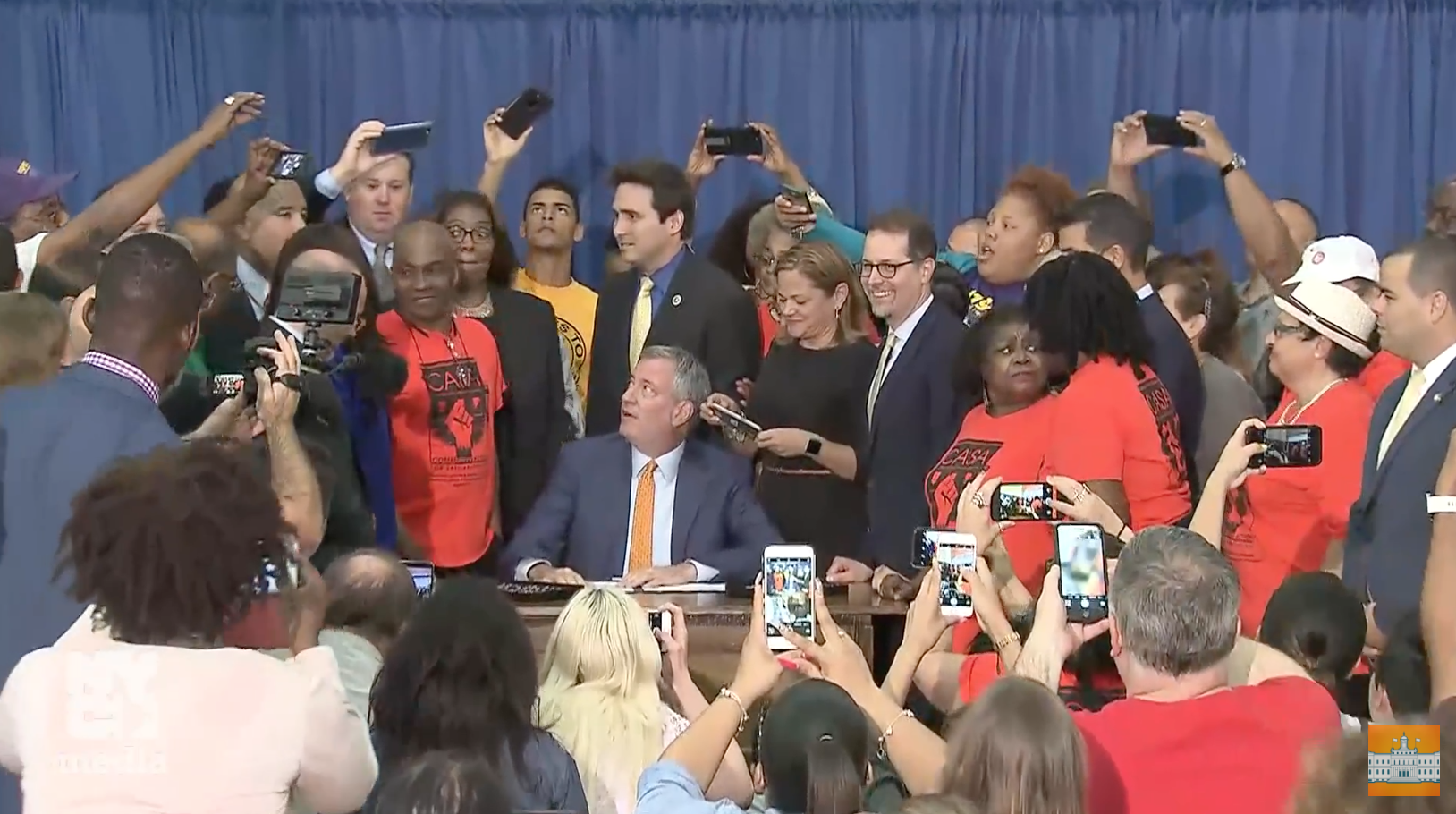 The city held an event called No Tenant Stands Alone in which the mayor addressed city residents about the bill.

“We are here to make sure that good family does not end up in a shelter when they could be staying in an apartment,” de Blasio said.

On July 20th, the New York City Council voted overwhelmingly to approve legislation that would provide legal counsel to all residents facing eviction in some form.

The mayor also took a shot at President Donald Trump during his speech, criticizing the president’s Twitter usage.

“You may not understand the tweet today that came from the white house, you may not be able to follow what they’re doing in Congress each day because it seems to change every hour,” de Basio said. “But guess what? You can do something right where you live to create better laws, to create more fairness, to create a society for everyone. That’s what we’re doing here in New York City.”

He also expressed his hope that this bill will spread into other cities and even other states.

“When you do something like this, it starts to spread,” de Basio said, saying tenants now have hope when they receive an eviction notice. “The next thing they’re going to do is they’re going to call 3-1-1 and they’re going to get a lawyer to defend them. It’s as simple as that.”

This new law quickly received support from advocacy groups in the city, and talk already began among other cities to follow New York City’s example.

“It’s impossible to overstate the significance of this on a national level,” said John Pollock, Coordinator of the National Coalition for a Civil Right to Counsel, which worked with the Right to Counsel NYC Coalition. “New York City has broken the ice on a right to counsel in housing cases, and now we’re hearing lots of other cities and states saying they want to be next.”

During his speech, de Basio explained the bill will send a message to landlords: Don’t even try to illegal evict a tenant. The mayor explained that while previously, landlords had lawyer and could do anything they wanted. “The game was rigged, and families suffered,” he said.

However, Diaz cautioned that while everyone is now getting a lawyer, this doesn’t guarantee a favorable outcome for all tenants, but rather, would even the playing fields.

“This is a huge victory for fundamental human and civil rights at a time when those rights are under attack,” said Randy Dillard, a tenant leader at Community Action for Safe Apartments and a leading advocate for a right to counsel since 2013. “For low-income families, keeping their home is as consequential as it gets.”

“For the first time, New York City’s low-income tenants facing eviction will be treated with the dignity and respect they deserve and will have a fighting chance to stay in their homes and communities,” Dillard said.