The number of families living in unaffordable conditions or in subsidized housing increased from 2013 to 2015, according to the newly released report from the U.S. Department of Housing and Urban Development.

The chart below shows the number of families living in these conditions since 2005: 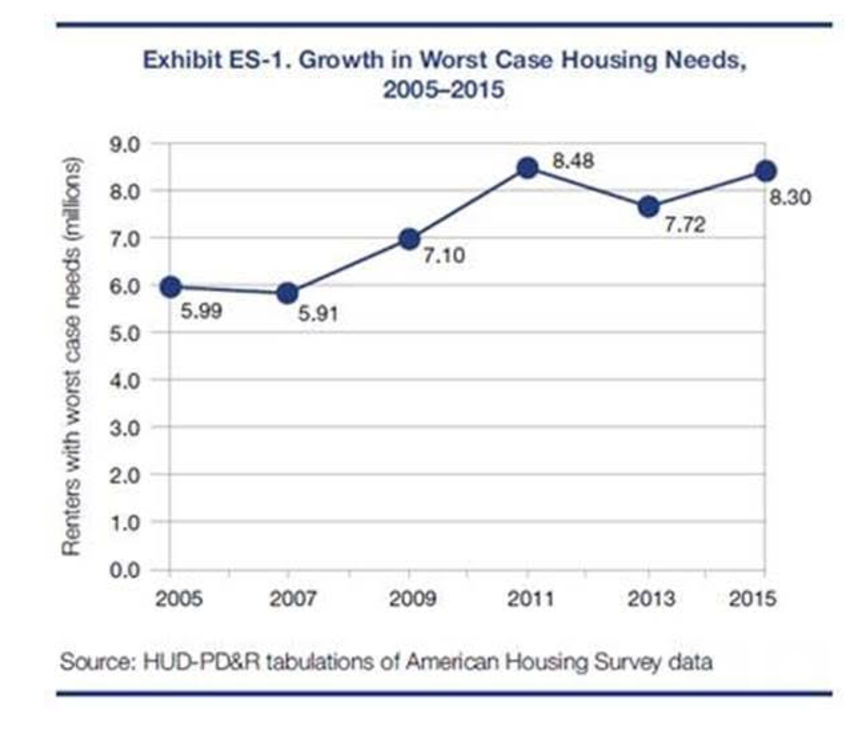 “Two years ago, our nation was still feeling the aftershocks of our housing recession with rents growing faster than many families’ incomes,” HUD Secretary Ben Carson said. “After years of trying to keep up with rising rents, it’s time we take a more holistic look at how government at every level, working with the private market and others, can ease the pressure being felt by too many un-assisted renters.”

“Today’s affordable rental housing crisis requires that we take a more business-like approach on how the public sector can reduce the regulatory barriers so the private markets can produce more housing for more families,” Carson said.

HUD explained President Donald Trump and his administration are currently seeking to improve affordable housing by decreasing the government’s role in the private mortgage market. While the administration continues to insist GSE reform is still a priority for the Trump administration, legislation has yet to come forward.

However, the National Association of Home Builders is crying for more immediate action for the growing unaffordability.

“Congress and the Trump administration need to make it a top priority to enact policies that will promote the construction of sorely needed rental apartments,” NAHB Chairman Granger MacDonald said. “The bipartisan Cantwell-Hatch bill pending in the Senate would expand the Low Income Housing Tax Credit, the nation's most successful affordable housing program, and result in an additional 400,000 LIHTC units built over the next decade.”

“Swift congressional action to pass this bill would be an important step forward to meet the growing need to develop and preserve affordable housing in communities across America,” MacDonald said. “At the same time, we call on Congress and the administration to approve sufficient funding for the HOME program and important rental assistance programs, including housing choice vouchers and project-based rental assistance.”

HUD’s estimate is part of a long-term series of reports measuring the scale of critical housing problems facing very low-income un-assisted renters. It is based on data from the 2015 American Housing Survey conducted by the U.S. Census Bureau.

The number of households with worst case needs increased 66% since 2001, and historic increases occurred between 2007 and 2011. During this time, the combination of mortgage foreclosures, widespread unemployment and shrinking renter incomes dramatically expanded severe housing problems.

During the most recent report, rents continue to skyrocket, however rising income kept up with the growth. But for the poorest renters, this was not the case.