Affordable housing groups were dealt a terrible hand in President Donald Trump’s budget proposal, with one of the biggest groups, the Neighborhood Reinvestment Corporation, getting cut completely.

But after listening to the Senate Banking Committee’s hearing on Thursday on the nomination of Joseph Otting to serve as the next Comptroller of the Currency, all hope is not lost for the affordable housing group.

Neighborhood Reinvestment Corp., also known as NeighborWorks America, is a congressionally chartered nonprofit organization that supports community development in the United States and Puerto Rico and provides access to homeownership and to safe and affordable rental housing.

However, now NeighborWorks America is one of 19 independent agencies that are slated to be fully defunded under Trump’s budget proposal.

The budget proposes to end Federal support of NRC and only requests $27.4 million for 2018 solely to prepare for the discontinuation of Federal funding.

And it’s not only affordable housing program funding that will dry up. Under Trump’s proposed budget for the 2018 fiscal year, the Department of Housing and Urban Development as a whole would face a $6.2 billion cut. The cut represents an annual decrease of 13.2% and would allot $40.7 billion in gross discretionary funding for the agency. It’s important to note that that this budget is not final.

Sen. Jon Tester, D-Mont., used a portion of his time during the hearing to question Otting on his thoughts about affordable housing and the looming cuts.

In prepping for the hearing, Otting narrated how he went out and spoke with people in his home state of Nevada on the issue to learn about the organizations and gain a better understanding on how the groups give back to communities across the U.S.

His takeaway: these are important programs.

“Affordable housing is a critical element of our economy,” said Otting. “I also think we have to find a way for an organization like NeighborWorks to be able to maintain their place in America.”

And taking it a step beyond that, Otting added that he would be honored to represent the OCC on the NeighborWorks board. The NeighborWorks’ board includes representatives from the Federal Reserve, OCC, Department of Housing and Urban Development and the National Credit Union Administration.

NeighborWorks’ could definitely benefit from someone pro affordable housing on its board since its future remains questionable.

Tester highlighted how the president slashed the budget of NeighborWorks to $27 million, adding that he also cut a lot of other affordable housing programs.

“If these are programs you believe in, are you willing to push back and talk about the positive impacts of these programs and potentially help us get to the point where the funding is at a reasonable level?”

Otting promptly replied, “I would be happy to.”

For a broad overview of the impact NeighborWorks has on the nation, check out the chart below. For a more in-depth explanation of the program, feel free to look at the program’s impact section on its website. 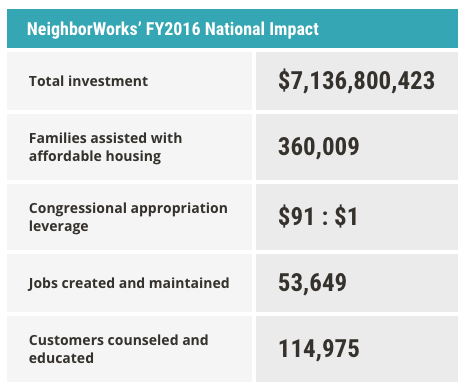