While complaints from older consumers don’t necessarily make up the largest portion of the Consumer Financial Protection Bureau’s complaint database, the risk of financial exploitation of this population is growing, as more older consumers report complaints around mortgages and debt collection.

Since it began accepting complaints in July 2011, of the 1,163,200 complaints the bureau has handled, 54% of consumers have voluntarily reported their age.

From there, more than 103,000 complaints have come from consumers who report that they are 62 years old or older.

And this number is only growing. The CFPB’s latest Monthly Complaint Report stated that there are more than 10,000 Americans turning 62 every day, making this cohort one of the fastest growing groups in the marketplace.

As a result, the report cautioned that they are also at risk of financial exploitation, struggles with debt, and entering retirement with limited savings.

Of the 2,169 complaints from older consumers handled in March, there were 496 complaints about debt collection. After that, the second most-complained-about consumer product was mortgages, which accounted for 486 complaints.

The chart below shows the breakdown of monthly consumer product trends. 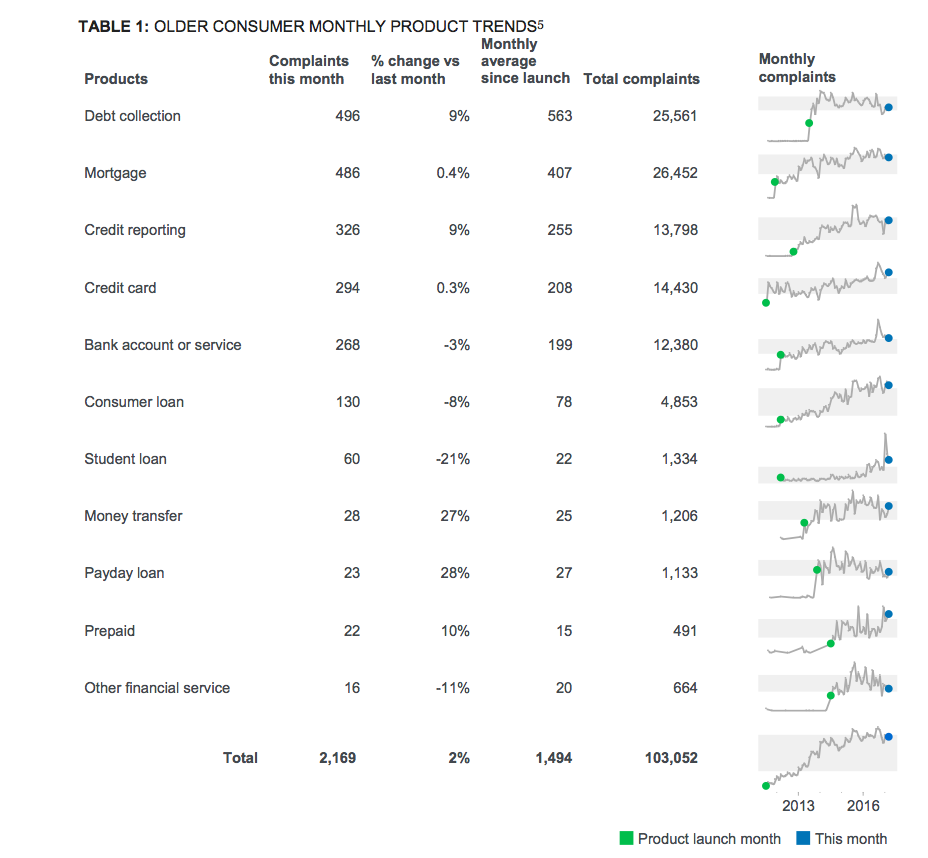 Mortgages also make up a larger percentage of older consumer complaints than those under 62, the report cited.

Complaints related to mortgages have accounted for 26% of all older consumer complaints submitted to the Bureau since 2011, which is 10 percentage points higher than the proportion of mortgage complaints from consumers under 62.

The chart below shows the type of mortgage complaints reported, with problems or inability to pay coming in at No. 1. 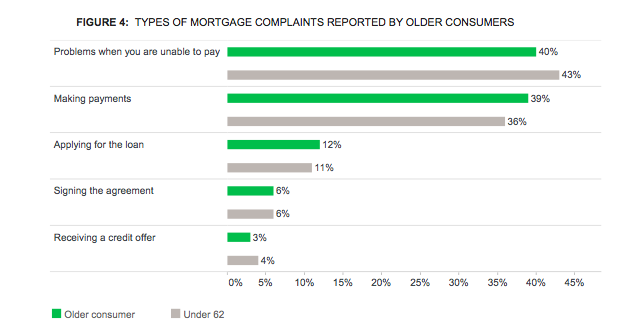 The CFPB began accepting reverse mortgage complaints in December 2011. Reverse mortgages are exclusively available to people over 62 years of age and allow people to borrow against the equity in their homes.

Given the prominence of the product by older consumers, the CFPB pulled data from the complaint database on how it is performing.

According to the report, older consumers with a reverse mortgage commonly felt at risk of foreclosure following the death of the borrowing spouse due to servicing problems.

In light of the data, CFPB Director Richard Cordray said, “Older consumers who may be on a fixed income are at a greater risk for financial trouble if they encounter problems with financial products or services. The complaints submitted by older consumers are important for the Bureau to ensure we are properly looking out for this segment of the population.”