Drew Vandermay runs operations for the valuation department of Digital Risk, which performs more than 6,000 valuation reviews per month for top banks and lenders and is responsible for more than $275,000 in monthly revenues.

When he joined Digital Risk in 2009, valuation services were viewed as a labor source, but due to the appraisal team’s accomplishments, appraisal services became its own revenue-generating entity and eventually transformed into its own unit (DRVS). Vandermay was a large part of that transition, as he was responsible for managing several successful client relationships and project scopes.

In 2014, Vandermay and his team had to retool DRVS’s entire solutions suite to transition from a forensic shop to an originations-centric shop. He led efforts to identify best-suited market opportunities, partnered with Digital Risk sales teams, worked with the client to develop and customize the project’s scope and managed the client on-boarding, project implementation and continuous project execution.

In addition, he has mentored his direct reports in the areas of business development, facilitating over 50 promotions during his tenure at Digital Risk. 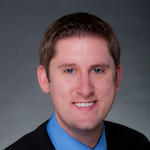 In a fast-paced environment, organization is key. Always drive for perfection while working smarter, not harder.