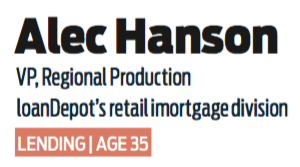 Alec Hanson joined loanDepot in 2010, managing three branches and 65 employees. His volume has since grown 225% and branch infrastructure has grown 456% — now including 14 total branches.

Hanson spent years in production as a nationally ranked, top 1% loan originator, organically creating top-producing branches for large, national lenders and he now coaches many loan officers. In addition to being the No. 1 rookie originator in 2005, according to Mortgage Originator, he has been a top percentage producer annually and has received numerous loanDepot President’s Club awards.

Hanson was an active part of the Orange County and Newport Beach Associations of Realtors when he was a loan originator. In 2010, he joined the board of directors for the breast cancer awareness group, Barbells for Boobs, to honor his mother who has breast cancer. The group raises $2 million to $4 million a year and grants the money to a variety of major foundations such as Susan G. Komen. 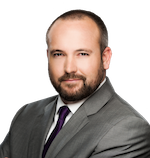 Undeniably the single most important habit that led to my success is a relentless work ethic. If you want to be successful, you have to work extremely hard. You also have to be tenacious in seeking feedback and in finding ways to improve your performance by learning from those who came before.