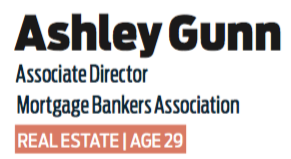 Ashley Gunn started a nonprofit to provide homes to low-income, inner-city families when she was still in high school. Gunn was recognized as the country’s National Young Entrepreneur of the year and addressed the 2008 Republican National Convention as one of the youngest speakers on record.

After high school Gunn worked and interned with financial services companies and the White House’s National Economic Council while attending the Wharton School at the University of Pennsylvania. Upon graduation, she worked at Bank of America Merrill Lynch.

In 2014, Gunn pivoted careers by joining the American Bankers Association, where she launched and supervised ABA’s Commercial Real Estate Lending Committee, ultimately growing it to more than 150 members and created the CRE Lending Bulletin for ABA members. 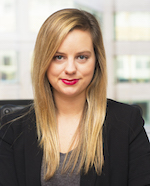 WHAT'S THE BEST PIECE OF ADVICE YOU HAVE EVER RECEIVED?

My father, a quintessential politician, ingrained in me at an early age to always ask questions and to get people to talk about themselves. He taught me, it’s not about me. It’s about them. Learning to listen has helped me strengthen my relationships with clients, work better with colleagues and ultimately develop a strong professional network.